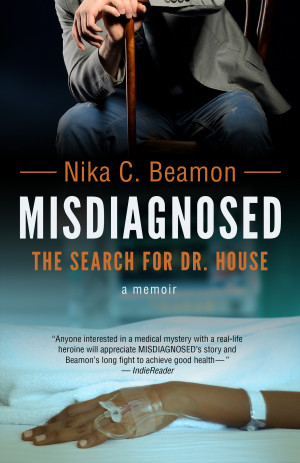 Misdiagnosed: The Search for Dr. House

Misdiagnosed: The Search for Dr. House, a memoir, is the tale of a Nika Beamon's 17 year quest to find the correct medical diagnosis. This engaging story takes the reader on journey that is real and raw. It also introduces them to a quirky cast of characters who go through this odyssey with her until she finally finds out that she has a rare autoimmune disorder. More
When a lymphoma scare threatened the life of a journalist, she began a quest to find the correct medical diagnosis for the mysterious illness she'd battled for nearly 20 years. She turned to her favorite TV show, House M.D., for inspiration. She used her research skills to look for a "real life" Gregory House to give her some answers. In this brutally honest memoir, Nika Beamon reveals how she found the doctor who saved her and how you might be able to also.
Available ebook formats: epub mobi pdf lrf pdb txt html
First 10% Sample: epub mobi (Kindle) lrf more Online Reader
pdb
Price: $3.99 USD
Buy Add to Library Give as a Gift
How gifting works
Create Widget
Tags: women journalist health care chronic illness autoimmune disease women and health conditions and diseases medical advice medical memoir sickness and health singlehood africanamerican author health and illness
About Nika C. Beamon

Nika C. Beamon is a TV News Writer/Producer in New York. She pursued a BA in Communications and a BA in Sociology at Boston College in Massachusetts.
Beamon has been credited as a reference in the several books on television news and has also won many awards throughout her career including a Peabody Award for ABC News’ coverage of the September 11th Attacks.
In 2009, Chicago Review Press published her well-received non-fiction book: I Didn’t Work This Hard Just to Get Married: Successful, Single Black Women Speak Out. In 2000, she published her first mystery novel, Dark Recesses. In 2002, her second mystery novel, Eyewitness was released.

Reviews of Misdiagnosed: The Search for Dr. House by Nika C. Beamon

You have subscribed to alerts for Nika C. Beamon.

You have been added to Nika C. Beamon's favorite list.

You can also sign-up to receive email notifications whenever Nika C. Beamon releases a new book.