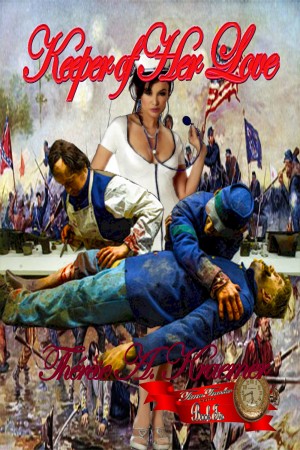 Keeper of Her Love

By Therese A. Kraemer
Adult

The story continues in sequels, Time’s Secret, Time over Time, Timeless Love and Keeper of My Heart.

Editors Note:
Many characters in this book have accents and or different speech patterns. The author has attempted to illustrate this phonically. These are not spelling errors.

Because I am dyslexic, I find writing a challenge, but my love of writing has inspired me to write more than sixty children’s stories, over two hundred poems and thirty-seven Romance Novels. I have also illustrated two story books used by primary teachers and students as a part of a vocal hygiene program at University of Arizona’s Department of Speech and Hearing Sciences.

I had an exhibition at the King Center for the Performing Arts in Melbourne, Fl of my pen and ink drawings of animals. Recently, I have had three E-Book Romance Novels and a book of short stories published on the Spangaloo.Com website and another on the Smashwords.Com website. I make my home in Melbourne, Florida where I continue to write and illustrate

Learn more about Therese A. Kraemer

You have subscribed to alerts for Therese A. Kraemer.

You have been added to Therese A. Kraemer's favorite list.

You can also sign-up to receive email notifications whenever Therese A. Kraemer releases a new book.