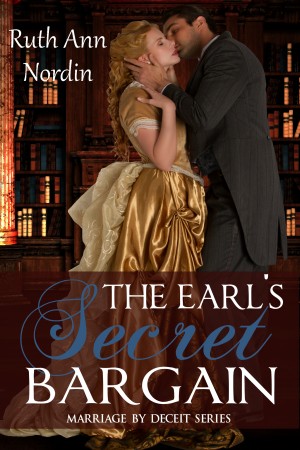 It’s the most daring wager at White’s, and quite possibly the most foolish.

Toby York, the Earl of Davenport, knew it was a mistake to make the wager when Lord Pennella stormed into White’s bragging that he could get any lady he wished. Toby really should have kept his mouth shut. But he didn’t.

And now there are only three things he can do to protect Miss Giles. One, he must get her to choose him instead of Pennella. Two, he must make sure she never finds out about the wager. And three, he must quietly break off the engagement so that she is free to marry a gentleman worthy of her. As long as he doesn’t fall in love with her, there should be no problems.

Also in Series: Marriage by Deceit

Reviews of The Earl's Secret Bargain by Ruth Ann Nordin

It is good read, enjoyable and entertaining. But these history series are becoming kind of repeat and shallow after reading a few. As most of these stories are about the lady, and about title, and money, there is no chance to see the normal people. Kind of losses its touch with reality. I wonder what those men did as work each and every day? They always seems to be in some white club..Ladies always seems to be searching for husbands..

Awesome!! I love it!

The Earl’s Secret Bargain by Ruth Ann Nordin
Marriage by Deceit Series Book One
Toby York, Earl of Davenport is sick and tired of the braggart Lord Pennella and gets caught up in a wager with him at White’s. Who can win the heart of the woman Toby’s chooses, Pennella or him? Who knew such a foolish wager can lead him to the best thing in his life? Or that the same wager can cause him to lose so much?

Miss Regina Giles is being pushed into marriage by her well-meaning mother. They had wealth without a title and thanks to Lady Seyton’s lessons, she could supposedly catch a titled man’s eye and get a proposal within the month. This being her mother’s wishes not her own. Yet when two men both start vying for her attentions, she finds having the title that comes along with Lord Davenport wouldn’t be such a bad thing. A good honest, humble man...or not.

Secrets always seem to come to light and expose the truth, they usually never choose a good time to do so. Toby is determined to regain Regina’s trust and prove that he is the man she thought he was, only trust lost is very difficult to recover. Several characters from previous books have cameos in this story, Lord Edon, Clement and Roderick and of course Mister Robinson whose book this story begins in. Looking forward to book two when Lady Seyton is asked to help a duke find a wife.
**Sexual content within marriage
http://justjudysjumbles.blogspot.com/2011/09/ruth-ann-nordin.html