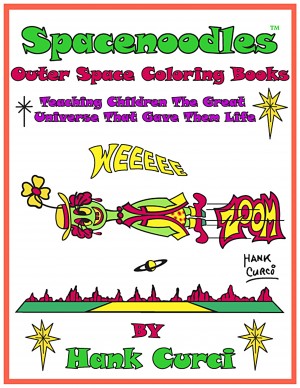 By Hank Curci
Spacenoodles Outer Space Coloring Books: Teaching Children The Great Universe That Gave Them Life...Adventure In To The Final Frontier. More
The SPACENOODLES characters come from the Centauri globular star cluster whose scientific name is NGC 5139. These characters live in a region of the cluster where the stars are about 3 to 5 light years apart and have been evolving for millions of years by skip-hopping from a dying star to a new one just starting out. The SPACENOODLES COLORING BOOK is derived from the successful website called SPACENOODLES.COM which are FREE OUTER SPACE GREETING CARDS and is a great complement to the fun-filled stories and virtual characters found in two HANK CURCI eBooks (CAESAR'S JAGUAR & GREEN STREAK 396) sold on leading world wide eBook stores.

Hank Curci Holds a Masters Degree in Mathematics from Stanford University and is a former Senior Aerospace Engineer designing Inertial Navigation and spacecraft rendezvous points between Earth and Mars...his friends called him "The real Captain Kirk"
Hank Curci is also a concert pianist giving Cole Porter, Gershwin and Broadway show tune concerts in the Seattle area and also Stanford University.
His songs are being played on the international radio circuit and can be purchased on iTunes.
Hank Curci is the creator of www.spacenoodles.com free outer space greeting cards and writes a daily outer space blog on www.hcurci.wordpres.com.

You have subscribed to alerts for Hank Curci.

You have been added to Hank Curci's favorite list.

You can also sign-up to receive email notifications whenever Hank Curci releases a new book.