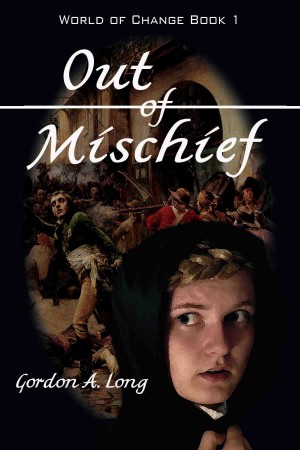 Out of Mischief: World of Change Book 1

By Gordon A. Long
Rated 4.00/5 based on 3 reviews
Thrown into a nasty rebellion by a schoolgirl prank gone wrong, Aleria faces rape, murder, and worse. She is shielded by an Army spy who has infiltrated the band of thugs that captured her. But after a while she begins to wonder if he isn't getting too enthusiastic about their violent charade. More
Over the centuries since its founding, the landlocked and iron-poor realm of Galesa has developed a social and religious horror of mechanical devices. But the modern world is creeping through the mountain passes. Farm machinery and the printing press have already arrived; steam engines and repeating rifles are on the way. How will these backward people cope?
And in this realm, so removed from the rest of its world, we find Aleria, equally out of touch with her society. Born into a Ranked family, she has no interest in the mannerly social world of her classmates. All their activities seem flat, pale and useless, and she constantly schemes to spice up her life. Her loving parents despair for her future, in fear that her next prank will prove harmful to herself or someone else. Only a few close friends support her.
And then one of her stunts goes wrong, and throws her into an ordeal that destroys her confidence and cripples her emotions. Seeking a solution, Aleria starts down an unusual path for one of her station. Her Battle Arts Master warns her, “Use violence to solve a problem and you become a different person. Violence will be one of your options for the rest of your life. There is no going back.”
That suits Aleria. For her, there has always been only one direction: forward.
Download: epub mobi (Kindle) pdf more Online Reader
rtf lrf pdb txt
Price: Free! USD
Add to Library
Create Widget
Tags: coming of age adventure fantasy strong female character sword alternate world character driven
About Gordon A. Long

Brought up in a logging camp with no electricity, Gordon Long learned his storytelling in the traditional way: at his father’s knee. He now spends his time editing, publishing, travelling, blogging and writing fantasy and social commentary, although sometimes the boundaries blur.
Gordon lives in Tsawwassen, British Columbia, with his wife, Linda, and their Nova Scotia Duck Tolling Retriever, Josh. When he is not writing and publishing, he works on projects with the Surrey Seniors’ Planning Table, and is a staff writer for Indies Unlimited

Learn more about Gordon A. Long

About the Series: World of Change

Tales of a world entering its Industrial Revolution, where guns are replacing swords, steam is replacing sail, and societies that can't change rapidly will soon be replaced as well.

Also in Series: World of Change

Gordon A. Long has done an excellent job building an Old World type setting for this story. Aleria is a smart, self-assured, high-strung, spunky teenager from an upper class family who is able the see the hypocrisy going on around her. She has a reputation for pulling harmless pranks or stunts to call these out. She also has a talent for sizing up people’s characters rather quickly. After completing the class Quest, an individual rite-of-passage, Aleria comes to the conclusion that it was more or less a farce, which doesn’t prove her mettle. So she initiates her own Quest to prove to herself she is capable of taking care of herself.

Now the real adventure begins. She is smart enough that she shares her destination with her best friend Mito, who has promised not to tell unless Aleria doesn’t return in a proper amount of time. After being on the road a few days she meets a fellow traveler who has traversed this road many times before. She asks to join him on a short cut across a mountain trail. When a rebellion breaks out in the direction Mito knew Aleria was headed she alerts her parents and a search for Aleria begins.

Aleria learning about the rebellion makes smart decisions and tries to alert the authorities. Thinking she is now safe she inadvertently gets captured by Raif, one of the rebel rousers. These men are a loathsome group of disparate men. It is all Aleria can do to try to stay alive and sane while suffering abuse and the threat of rape. However, Raif is not who he seems and Aleria must decide whether to trust him or not. The pace of the story turns fast and furious at this point and became hard to put down. There are a fair number of twists because these men are not very well organized.

The story starts out slow as we are introduced to Aleria, her parents, and a few of her classmates. I found the cast of characters who played important roles were well developed. The dialogue seemed realistic with a good amount of humor. I really enjoyed Aleria and Mito’s friendship. Mito is from the poorer side of town but has managed to enroll in the girls Academy. Mito is a smart, levelheaded girl who tries to keep Aleria balanced, their heart-to-heart talks were engaging and intelligent. I am hoping for some romance to develop in book two, there are a couple of possibilities.

Out of Mischief is Book 1 in the World of Change series.

Format/Typo Issues: I found a small number of proofing errors throughout the text.
**Originally written for "Books and Pals" book blog. May have received a free review copy.** June 18, 2015

I really enjoyed the story. The characters are likeable and the story unfolds quite nicely. I have to agree with my fellow reader - a little more emotion would be nice. Overall, it was a good read and I look forward to the next installment(s).

Out of Mischief is a rite-of-passage novel. The main character, Aleria, is a teenager from a privileged background who delights in defying convention. She enjoys playing mischievous pranks, and encouraging her best friends to do the same. Yet her world-view changes during the Quest, a character-forming rite that all high school graduates must complete. Yet Aleria discovers that the Quest is little more than a charade, which she feels accomplishes nothing. She decides to embark upon her own version of the Quest, but although it starts well, events overtake Aleria and she finds herself embroiled in a rebellion led by some extremely unsavory characters. In danger of being raped — or worse — Aleria is taken under the wing of an unlikely champion; one who is more than he first seems. Aleria will be forced to help him complete his mission.

I have read three of Mr Long’s other novels and enjoyed them immensely. He is a very competent writer and plot-spinner. This novel will sit nicely in the New Adult genre it’s aimed at, although I would personally have liked to see a touch more emotion come through the writing  - hence my four-star rating. I will certainly read the sequels to this novel.

You have subscribed to alerts for Gordon A. Long.

You have been added to Gordon A. Long's favorite list.

You can also sign-up to receive email notifications whenever Gordon A. Long releases a new book.