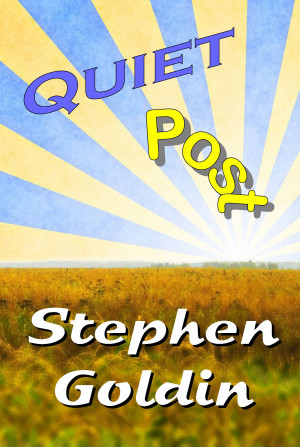 By Stephen Goldin
Rated 4.00/5 based on 1 review
Escaping a bad love affair, Martia Rosenthal signs up for an assignment in the Quasiverse, where anything can happen--and often does. Martia encounters mutant snow globes, carnivorous bouquets, locks that are very particular how they open, skies that change color daily, a sporting event with fanged sheeposauruses, and a randomly dead murder victim. But can even she survive the Elevator of Doom? More
From the author of POLLY! and TREK TO MADWORLD comes a truly bizarre comedy of outlandish proportions.

The Quasiverse: A land that’s a combination of Oz, Wonderland, Discworld, and general surreality, where anything can happen and often does; a land of snow globe mines and french fries plantations; a land where bossy birds can have teeth and locks can be very particular about how you stick a key in them; a land where you never know what color the sky will be when you wake up in the morning and where murder victims can be only randomly dead.

Martia Rosenthal is escaping from a bad love affair, and enlists for a diplomatic assignment in the Quasiverse. With the combination of her wealth and the position of sub-legate, she’s assured it will be a quiet post. But she reckons without the vagaries of this bizarre world, where the unusual nature of her friends, as well as her enemies, threatens to end her sanity, if not her very life.

Martia Rosenthal had a nice job with a good future at her father's company -- until her co-worker and boyfriend dumped her, stole a batch of corporate secrets, and left for Europe. Now, she just wants to start over, on her own, far away, and maybe "help people." She decides to go to a frontier settlement in the "Quasiverse." Her father is devastated, but still manages to get her what seems to be a safe job in the local government -- a "quiet post."

This is not "Nuts & Bolts" Science Fiction. The laws of physics and logic don't apply in the Quasiverse. It's more like a mix of the wild west, Oz, and Alice's Wonderland.

The characters are (mostly) likeable and the adventures are fun. Most of the loose ends are tied up (pretty cleverly) by the end. Some parts of the story are a bit risqué, but never seriously.

I enjoyed this book.