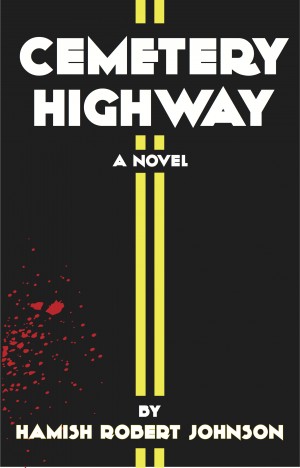 By Hamish Robert Johnson
Cemetery Highway is a rollicking tale of fame, friends and falls from grace in a world where zombies are the elite and humans are the underclass.
Michelle, Dexter, Penny and Cakes started a crew called the Anti Zombie Alliance and plan on sticking it to the zombies once and for all. But when zombie big-wig Max convinces suave Dexter to trade his standards–and friends–for stardom, things get ugly. More
Industry is the one city remaining where humans can still enjoy a reasonable quality of life. Sure, they have to work low paying jobs, live in squalor and give up on their dreams, but at least the Zombies leave them alone. Zombie Corporation and The Royal Zombie Army are stationed in Grand City and are in charge of everything.
Dexter, Mishy, Penny and Cakes are all dating each other, but have an eye for the one they are not with. When Dexter tries it on with Mishy before breaking up with Penny things get ugly and he is left out in the cold.
Max, a dapper zombie leader approaches heartbroken Dexter with an offer: If Dexter willingly becomes a zombie; wealth, power and career prestige will be bestowed upon him. Dexter offers Max a swig of his wine as he ponders his decision. Max drinks the wine and Dexter accepts the contract.
Dexter becomes the world’s biggest zombie rock star, famous in humans and Zombies alike. Max takes up boozing and carousing and is subsequently shunned from the zombie community. Dexter is billed to perform at Judgment Day, a concert of celebration, open to zombies and humans alike. In a private meeting, the Zombie King instructs Dexter to order the slaughter of the human audience. If he does not comply he will be killed.
Mishy, Penny and Cakes travel to confront Dexter at Judgment Day. They feel responsible for his transition and feel they must end his reign.
Available ebook formats: epub mobi pdf rtf lrf pdb txt html
First 20% Sample: epub mobi (Kindle) lrf more Online Reader
pdb
Price: $2.99 USD
Buy Add to Library Give as a Gift
How gifting works
Create Widget
Tags: adventure paranormal romance zombie music rockstar bad boy
About Hamish Robert Johnson

I grew up in Melbourne Australia and was fortunate enough to have a relatively unexciting childhood. After high school I attended film school at Deakin University, and while making the requisite pretentious art projects I discovered I had a knack for writing dialogue. In short, I wanted to be the next Quentin Tarantino.
After film school I put my passion asside and began an hilarious and relatively short lived culinary career. Quickly rising up the ranks, I found myself cooking in some of Australia’s finest restaurants and finishing a 3 year apprenticeship in 18 months. It was in these hellish kitchens that I rediscovered my love for quirky, dirty, flirty characters, which again stoked my desire for writing and the arts.
Upon hearing The Strokes for the first time, and with absolutely no preparation whatsoever I moved to New York City in 2003. I was once more surrounded by a bevy of interesting folks, inundating me with stories of hardship, romance and hope. How one cannot find inspiration in this city was beyond me. What was also beyond me was the ability to generate an income, so I hopped on the Greyhound with the little money I had left and got as far away as I could.
Austin Texas was my next port of call. Upon arriving I had a mere $40 to my name, but coupled with the attitude of a fearless traveler I was invincible. I quickly finagled a job, a room in a Revenge of the Nerds style college housing situation and the prominent position as lead guitarist in The Handsome Charlies.
I wouldn’t say I was a great guitarist, but I certainly knew how to act like one, and as we were sharing bills with The Black Angels and Ghostland Observatory I could be excused for thinking that I too would make it. But after a particularly ghastly SXSW performance I found myself standing in the parking lot listening to The Strokes perform “Is this it?” across the road. “No it is not”, I answered, and declared that I would return to writing and not continue to get distracted by flashier pursuits.
I commenced writing screenplays, pilots and webseries like a madman and have not slowed down since. I now have multiple screenplays in various stages of development, and have completed my first novel. And I am here to stay!

You have subscribed to Smashwords Alerts new release notifications for Hamish Robert Johnson.

You have been added to Hamish Robert Johnson's favorite list.

You can also sign-up to receive email notifications whenever Hamish Robert Johnson releases a new book.