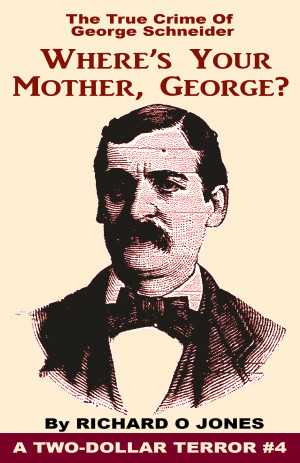 Where's Your Mother, George? The True Crime of George Schneider

By Richard O Jones
Everyone in the Schneider family presumed that the widow matriarch Catharine was staying with her favorite son George on his remote Ohio farm. When George, his wife Margaret and their seven children showed up to a family dinner without her, suspicions ran high. No one could believe the story he told about a pair of highway bandits and a shallow grave. More
George said that he was taking his mother to a train in the fall of 1883 when they were overcome by two robbers at the end of the lane at the edge of his farm. In the course of the robbery, he claimed, the robbers killed his mother, and buried her in a ravine on George's property. He fetched a shovel for them. George said they threatened his family, so he kept quiet about it for five long weeks. This novelette-length story details the unraveling of George's story and the terrible price he paid for his rage.
Available ebook formats: epub mobi pdf rtf lrf pdb txt html
First 15% Sample: epub mobi (Kindle) lrf more Online Reader
pdb
Price: $1.99 USD
Buy Add to Library Give as a Gift
How gifting works
Create Widget
Tags: murder hamilton ohio matricide 1884 butler county darrtown
About Richard O Jones

About Richard O Jones
After 25 years writing the first draft of history as a writer and editor for his hometown newspaper, the Hamilton Journal-News, Richard O Jones left the grind of daily journalism in the fall of 2013 for a life of true crime. He is the author of two books on the History Press imprint, Cincinnati’s Savage Seamstress: The Shocking Edythe Klumpp Murder Scandal (October, 2014) and The First Celebrity Serial Killer: Confessions of the Strangler Alfred Knapp (May, 2015). In 2016, he began a twice-weekly podcast "True Crime Historian" (www.truecrimehistorian.com) where he tells stories of the scoundrels, scandals and scourges of the past through newspaper accounts in the golden age of yellow journalism. He created the Two-Dollar Terror series of novella-length ebooks. Mr. Jones, a creative writing graduate of Miami University, Ohio, spent most of his career as an arts journalist and has won numerous awards for his reviews and profiles. In 2004, he was named a Fellow of the National Endowment for the Arts Theatre and Musical Theatre program at the Annenberg School of Journalism. The Ohio Associated Press named him Feature Writer of the Year in 2011. Since leaving the newspaper world, Mr. Jones has become an active member of his local history community as a board member of the Butler County Historical Society, a member of the History Speakers Bureau and a regular presenter at Miami University in a program titled “Yesterday’s News.” The Michael J. Colligan History Project of Miami University presented Mr. Jones with a Special Recognition for Contributions to Public History for his coverage of the Centennial Commemoration of the Great Flood of 1913.

About the Series: Two-Dollar Terrors

In the spirit of the dime novel and the pulp magazines of old, true crime author Richard O Jones established this series of affordable novella-length stories of the scandals, scoundrels and scourges of the past.

Reviews of Where's Your Mother, George? The True Crime of George Schneider by Richard O Jones

You have subscribed to alerts for Richard O Jones.

You have been added to Richard O Jones's favorite list.

You can also sign-up to receive email notifications whenever Richard O Jones releases a new book.