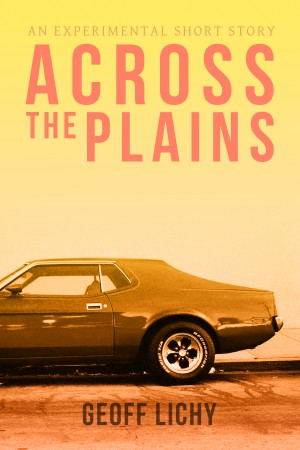 A well-to-do senator is drugged at a fundraising dinner. He wakes in an unfamiliar place, missing his personal effects, and is soon swept into the underworld of organized crime. Surrounded with kidnapping and uncertainty, he's tasked with bringing an important package to a drug lord. And he might be having second thoughts about this deal with the devil....

Geoff Lichy lives in New York's Hudson Valley. He's a graphic designer and photographer who has a lot of stories to share. Sometimes he makes music out of them, and sometimes he puts them into words.

Reviews of Across The Plains by Geoff Lichy

A variety of mini-stories makes for a mixed bag of quality, but overall Across the Plains is an interesting and thought-provoking read.

Part One was a great start. It caught me right off the bat and the captivating little plot kept me going even through the clunkier sections of the prose. Part Two was definitely my favorite, though. I found myself stopping in the middle of Part Six to go back to it. As I read, I wanted an entire series about the almost adventures of all those “almost friends”. That one paragraph was my favorite part of the whole book. The author takes the “tell” part of the old “show, don't tell” cliché and uses it very effectively in this one little section. As the description of Across the Plains notes that the it is something of an experiment, I thought I should note that this is where I think the work shines best.

Parts Three and on ended up losing me until the Final Scene, and it was there that my brain started to pinpoint the issues I have with the entire work in general (and this does extend to Parts One and Two, even though I love them). The description was very elegant throughout. At certain points, Lichy does a really great job of creating little worlds me to lose myself in, but after reading a lot of the longer sentences more closely, I did realize that there are a few of ways the prose can be tightened without losing its simple beauty. I think there should be a balance between sentence flow and sentence length for the sake of readability, and here the prose definitely skews toward the former. Longer sentences can be beautiful if used right, but I often found myself reading the same sentence over again or losing the main point of the paragraph. That sort of drag isn't good at keeping a reader's interest. This is especially apparent in Part Seven.

And even though I could just blame my own (terribly) short span for the above complaint, I think it's worth mentioning because tighter prose makes for a more accessible story, which makes for a wider range of readers regardless of attention span. Just a thought.

Except for Parts One and the Final Scene, it's probably going to take me another read-through (or two) to get the subtle connections between each part (if there are any). If the author intended for the reader to catch on to an over-arching plot over the course of the story, then I know that I ended up missing it. Taking each story as a stand-alone, though, I say that each one had at least a little something to offer, some more than others. This is the type of work I would recommend to a friend, mostly because I think every reader will draw something different from it. Each part left me curious but not unsatisfied. With some editing for typos and more varied sentence structure, I believe that this could be a work that keeps readers coming back again and again. As for me? I think that Across The Plains is on my Kindle to stay.

You have subscribed to Smashwords Alerts new release notifications for Geoff Lichy.

You have been added to Geoff Lichy's favorite list.

You can also sign-up to receive email notifications whenever Geoff Lichy releases a new book.