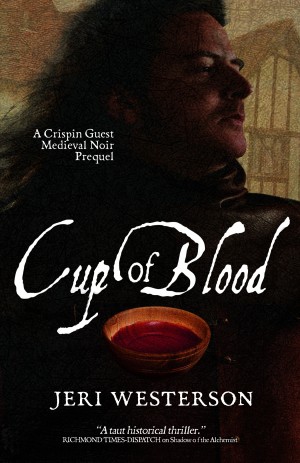 By Jeri Westerson
In this prequel, disgraced knight turned detective Crispin Guest has his hands full in more than murder: his abduction, two women, a young cutpurse, and a friend turned adversary. More
When a corpse turns up at his favorite tavern, Crispin Guest—disgraced knight turned detective--begins an inquiry, but the dead man turns out to be a Templar knight, an order thought to be extinct for 75 years, charged with protecting a certain religious relic which is now missing. Before he can begin to investigate, Crispin is abducted by shadowy men who are said to be minions of the French anti-pope. Further complicating matters are two women: one from court with an enticing proposition, and another from Crispin’s past, dredging up long-forgotten emotions he would rather have left behind. And as if all that weren’t enough, a cunning young cutpurse by the name of Jack Tucker has insinuated himself into Crispin’s already difficult life. The deeper Crispin probes into the murder, the more it looks like the handiwork of an old friend turned adversary. With enemies from all sides, Crispin has his hands full in more than murder in this intriguing prequel to the acclaimed series.

L.A. native Jeri Westerson has been a journalist, a theology teacher, and graphic artist, among other things. As a novelist, she combined the medieval with the hard-boiled and came up with her own brand of medieval mystery she calls Medieval Noir. Her brooding protagonist, Crispin Guest, is a disgraced knight turned detective on the mean streets of fourteenth century London. Her sixth book, SHADOW OF THE ALCHEMIST, was named the Best of 2013 by Suspense Magazine. Her latest, CUP OF BLOOD has already garnered critical acclaim. Jeri’s Crispin Guest books have been nominated for a variety of industry awards, from the Agatha to the Shamus. She is president of the Southern California chapter of Mystery Writers of America and a member of several writing organizations. Jeri speaks all over the southland about medieval history, including as a guest lecturer at the Bowers Museum in Santa Ana and Mt. San Antonio College in Walnut, CA. When not writing, Jeri dabbles in gourmet cooking, likes fine wines, cheap chocolate, and swoons over anything British. She herds two cats, a tortoise, a bevy of bees, and the occasional tarantula at her home in southern California. See more at JeriWesterson.com

You have subscribed to alerts for Jeri Westerson.

You have been added to Jeri Westerson's favorite list.

You can also sign-up to receive email notifications whenever Jeri Westerson releases a new book.