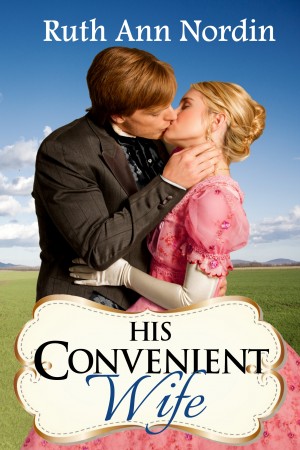 Rated 5.00/5 based on 1 review
Despite being rejected by Stan Craftsman in the past, Harriett Larson agrees to marry him for the sake of the girl he recently adopted…with the understanding theirs will only be a marriage of convenience. More
Harriett Larson has been in love with Stan Craftsman for years, but he’s never paid any attention to her. Instead, his focus has always been on her twin sister. So when Stan proposes to Harriett, she knows it’s only because he needs a mother for the little girl he recently adopted.

And while her first reaction is to turn him down, she can’t bring herself to turn her back on an innocent child who needs her. So it is with reluctance she agrees to marry him. But only on one condition. Theirs will never be anything more than a marriage of convenience. She will not be vulnerable to him ever again.

But as soon as Stan marries her, he regrets the deal he made. She’s not the wallflower he thought her to be. In fact, she’s much more appealing than her sister. The problem is, how can he convince her of that so they can turn their marriage of convenience into something much more?
Available ebook formats: epub mobi
First 20% Sample: epub mobi (Kindle)
Price: $2.99 USD
Buy Add to Library Give as a Gift
How gifting works
Create Widget
Tags: romance sex bride groom marriage of convenience virgin hero historical western
About Ruth Ann Nordin

Reviews of His Convenient Wife by Ruth Ann Nordin

His Convenient Wife by Ruth Ann Nordin
Harriett Larson has always been the quiet, invisible twin. Even the one man she loved since she was thirteen looked past her to only see Rose. Had even proposed to her sister while Kent Ashton has been seriously courting her. And now that he can’t have Rose, he turns to her. No way. Well maybe.

Stanley Craftman feels responsible for the death of his friend and promised he would adopt Randy’s daughter and raise her as his own. Who knew a two, almost three, year old could be so busy? And he was twenty-one and tired of depending on his folks to help him. He needed a mother for Maggie.

Poor Harriett...she looks identical to her sister on the outside but completely different on the inside. Can this marriage ever be more than just a convenience? Another heartwarming story by Ruth Ann Nordin. This isn’t part of the Nebraska Series but has many of the old friends from that series.
**Sexual content within marriage
http://justjudysjumbles.blogspot.com/2011/09/ruth-ann-nordin.html