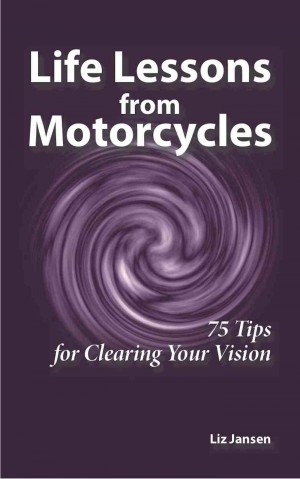 Life Lessons from Motorcycles - Seventy-Five Tips for Clearing Your Vision

Niagara native Liz Jansen was born into a German Mennonite culture, the granddaughter of Russian refugees. Since she began riding a motorcycle at age sixteen, she’s logged hundreds of thousands of miles of mostly solo riding across Canada and the United States. While Liz enjoys the rugged beauty of Ontario’s northern wilderness, she has a particular fondness for the open expanses of the Canadian prairies and Midwestern plains.

Liz is a member of the Writers’ Union of Canada, the Non-Fiction Authors Association, the Alliance of Independent Authors, and the Independent Book Publishers Association. Crash Landing is her third book. She lives in Ontario with her cat, Measha, and Trudy, her Triumph Tiger motorcycle.

You have subscribed to alerts for Liz Jansen.

You have been added to Liz Jansen's favorite list.

You can also sign-up to receive email notifications whenever Liz Jansen releases a new book.