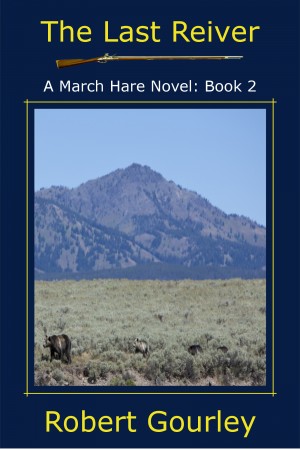 “John Mackenzie, I have a warrant for your arrest. This is your last warning before we break the door down!” shouted the angry sheriff.
Agnes McCredie walked over to the front door where on the other side, the sheriff was fuming. The elderly Agnes mustered up her courage and cleared her throat.
“Och, guid sir, the laird is nae at the hoose, ye ken,” shouted the old housekeeper through the front door to the sheriff, who stood outside on the stoop.
“Open up in there, old woman, we’ll search the house for him anyway,” replied the sheriff.
“Juist a wee moment sir, while I gang fer the pry bar t’ lever the bolt, haud on please!” shouted the old housekeeper who was already clutching the pry bar in both her hands while she pressed her ear to the door to see if she could hear what the sheriff was saying to his men.

'Kings Pinnacle' is Robert's first work of fiction in The March Hare Novels and is loosely based on the life of his great, great, great grandfather, Captain Thomas Gourley who fought several battles in the north and in the south during the Revolutionary War, including the Battle of Kings Mountain. The second book in The March Hare Novels is titled 'The Last Reiver'. It continues the story of the Mackenzie brothers that was begun in Kings Pinnacle. The third installment of The March Hare Novels is titled 'Fire Moon' and was first published in 2017.
Robert lives with his wife of over 35 years, Nancy, in Frisco, Texas.

You have subscribed to alerts for Robert Gourley.

You have been added to Robert Gourley's favorite list.

You can also sign-up to receive email notifications whenever Robert Gourley releases a new book.