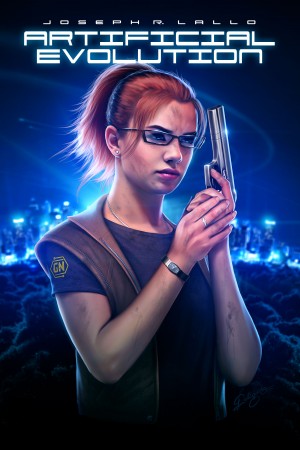 By Joseph R. Lallo
Rated 4.33/5 based on 3 reviews
Third in the Big Sigma series, Artificial Evolution begins with our heroes facing the bureaucratic wrath of VectorCorp. Thanks to a vindictive corporate operative, Lex is without a reliable job and Michella's network won't support her investigations. Checking out a supposed alien seems to be the perfect cover for some subversive journalism, but it might turn out to be her biggest story yet. More
Artificial Evolution is the third book in the Big Sigma series, building upon the story and characters introduced by Bypass Gemini and Unstable Prototypes. Lex, Michella and Squee are once again joined by the mercenaries Silo and Garotte. Along the way they'll need plenty of help from mad engineer Karter Dee and his AI Ma.

After butting heads with the megacorporation known as VectorCorp it was only a matter of time before Lex Alexander and his girlfriend Michella Modane would face the consequences. It is remarkable what a single corporate agent with the resources of a multi-global conglomerate can do to a person's career. In the space of a few days Lex is looking for work and Michella is feeling pressure from the network to ease off the hard-hitting stories. Not one to be silenced, Michella quickly hatches a plan to continue her investigations under the guise of a fluff story about a so-called extraterrestrial, and who better to be her personal driver than Lex?

Meanwhile, mercenaries Silo and Garotte are still nipping at the heels of the terrorist group known as the Neo-Luddites. Rumors of an attempt to secure a devastating weapon bring the pair to a forgotten little planet in an undeveloped corner of the galaxy. Circumstances require that local authorities lay claim to the terrorists' apparent target, but what sort of threat could one gangly collection of anatomical curiosities pose to the galaxy?

At the heart of this 3rd in a series is a frightening idea: self-replicating robots with no off switches. The story's good, if not totally original at this point. The problem is that it can sustain a book of a fraction of the length of this one. It's repetitive after a short while and, like Lallo's other books, ends up being a war story.

I'm not a fan of military science fiction, regarding war as a genre of its own, not a fit extension of S.F. Yet, I think it odd to people such a story with mavericks, reporters, and loners. Such aren't welcome in any military I've heard of and it makes for a lot of unrealistic situations in this book. Guardians of the Galaxy has shown that teams of odd balls can plausibly engage in fighting and daring do, so there's no excuse.

That written, Lallo writes good characters who are flawed but grow on the reader. He doesn't minimize the boredom, smelly, and generally unpleasant experience of life in small spacecraft. Worth reading in military S.F. is your thing.

3rd book in this series. All three are excellent. I think the 4th is out soon and i can't wait!

Love this series. Has everything you want in a space opera. Each book in this series kept me entertained with every page. This is not a hard core science fiction series, but a very fun read. Hope there will be more books in the future.

You have subscribed to Smashwords Alerts new release notifications for Joseph R. Lallo.