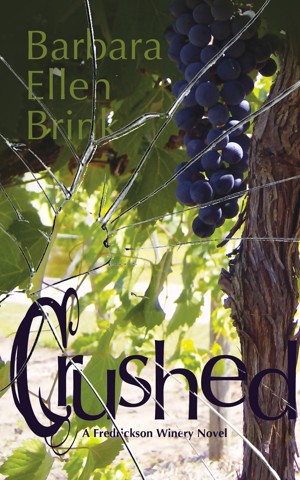 When Adam Fredrickson shows up at his sister’s California winery, footloose and carefree, looking for a temporary job and a chance to play his music, he doesn’t expect to meet the girl of his dreams. But the best things in life are usually unexpected.

Margaret Parker, a single mom, newly hired as Chief winemaker at Fredrickson’s, finds her perfect world put to the test when her father is allowed an early release from prison, and the man who got her pregnant when she was fifteen, shows up from Italy wanting to play daddy nine years too late.

About the Series: The Fredrickson Winery Novels

If you're looking for mystery, romance, and great wine, you've come to the right place. Head to the warm Napa Valley. The folks at the Fredrickson Winery are waiting for you…

I love how Brink writes and how she crafts her suspense stories. There is just enough realism and angst from the suspense element and a little romance to warm everything up. She does a fantastic job with romantic tension, too. I was feeling it and it was enjoyable indeed. I appreciated how this story tied into the first book, though you could probably read this book as a stand alone and still enjoy it very much. I've learned a lot about making wine and vineyards from reading this series.

The romance developing between Adam and Margaret (Meg) was yummy indeed. They were good for each other and needed to be together, but like any good romantic suspense, that has to get all jacked up to make the story an intriguing one. I loved seeing the characters from the previous books and experiencing the twists and turns in the story. There was also a bit of amateur sleuthing by Adam, which is always entertaining. The ending was killer too. This author has hooked me into the series and I'll be looking for the third installment. Bring it on!

(reviewed 5 months after purchase)
Romancing the Book reviewed on June 3, 2011

Ms Brink sets up the suspense immediately and continues to up the ante throughout Crushed. Two parallel love stories add unexpected twists. The characters are well-drawn and believable, and the setting in the lush California Napa Valley is described with enough detail to bring the reader into it, but not over-written. The author weaves the details of wine making through the story narrative, providing bonus information to readers unfamiliar with industry.

Her villains are villainous enough for the most discriminating suspense reader—a father convicted of child molestation but released too soon from prison; an ex-lover who took advantaged of a rebellious teen struggling to get past her early years in a dysfunctional family. Her heroes and heroines are heroic enough for the most discriminating romance reader—a loyal brother and first-class attorney; a woman who has moved from victim to victor; a free-spirited young man searching for his place in life; a young woman who, as a single mother, has had to grow up too soon.

This novel is one of those stories that you enjoy most— short enough to promise a quick resolution, long enough to provide all the action (romantic and suspenseful) that satisfies the reader’s soul.

Romance winds its way through a Californian winery in this the second Fredrickson Winery novel. Margaret Parker is a single mother. She became pregnant at the tender age of 16, and the father, a wealthy Italian abandoned her.

She became the head winemaker and her life was comfortable. Until she was contacted by the father of her child, and news of her father’s unexpected release from prison. From that moment her life was in turmoil. Her emotions were pulled from every angle.
The abduction of her son, the gathering in of a precious grape crop and shocking secrets all threaten to bring her to her knees. But the ever resilient Margaret, battles on and deals with all that is thrown her way.

Author Barbara Ellen Brink has captured yet again the pulling together of the wine community, and given us a storyline full of intrigue and family life. Of adventure and action. Of romance and loyal devotion.