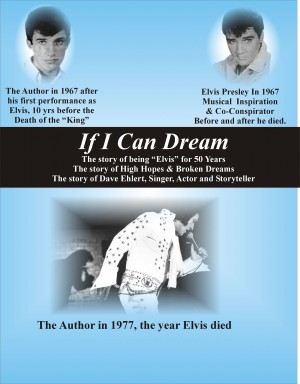 If I Can Dream, the Story of "Being Elvis" for 50 Years

Performance History
Dave Ehlert began performing in 1965 as Elvis in what has become the longest running Elvis Tribute Show in the world. He’s the first performer to be inducted to the Elvis Performer’s International Hall of Fame. He has performed in 44 states, Mexico and Canada as well as on a cruise ship in international waters. From 1994-2012, he operated the first theatre ever built in the tourist mecca Branson, MO. There, he widened his act to include tributes to many other characters including Tom Jones, Neil Diamond, Liberace, Willie Nelson, Conway Twitty, Johnny Cash, Roy Orbison, Nat King Cole, Ray Charles, Hank Williams and many more.
In 2004, he was “drafted” into the role of Mark Twain when the scheduled performer was unable to make it. He had one week to gather all the Twain background he could find and then walked on stage in full character, cigar in hand. For the first time in over 30 years, Dave felt something different on stage. He felt very nervous! He looked out at the audience and remained silent for two solid minutes. Then, as a Mr. Twain himself said of his own first lecture, “I began to speak.”
And speak he did. Performing 6 Twain programs a week for the first year in Branson and then taking Twain on the road to theatres and libraries across the country in 38 states. He has become absorbed in everything Twain. This is indicated in comments on Dave’s performance made by Professor Ben Click who teaches Twain studies at St. Mary’s College in Maryland: “What I found most refreshing is that you clearly had absorbed the essence of Twain's words, and rather than just repeat them you found refreshing contexts in which to put them. It's obvious that you embrace your subject. One other comment I would make is that your audience were completely engaged in watching and listening to you.”
In 2011, Dave was researching Twain’s involvement in the Civil War through a lecture series from Yale University’s Professor David Blight and became engrossed in the character of Abraham Lincoln. He then came up with a program dealing with the Civil War from two very different perspectives. Abe Lincoln, the Great Emancipator and Commander in Chief of the Union and Mark Twain, a Confederate deserter, son of a slave owner. Combining his original script with amazing visuals and music of the Civil War era, the result is a fascinating look at
America’s most perilous time through the voices of two of the Country’s Favorite Storytellers. Everywhere Dave has performed , the consensus seems to be the same as illustrated by comments from library directors below:
"Most successful program EVER!" Patti - Operations Manager Rosalie - Reference Librarian
Lebanon Laclede Public Library 915 S. Jefferson Ave Lebanon, MO 65536 417-532-2148

The Phelps Library was thrilled to host "A Visit with Mark Twain". Mr. Ehlert is an accomplished and wonderfully entertaining performer. His knowledge of Samuel Clemens' life and works is extensive and his show was appropriate for all ages. "An awesome program", "I am so glad I came - what a great show", "truly enjoyed the program, especially the Norman Rockwell connection. Lots of fun" & "from start to finish a genuine delight" were just some of the comments we've received at the library from our clients who attended this wonderful evening.

"Just a note to thank you SO much for being our special guest on Saturday. Everyone had a great time. Indeed, our phone has been ringing nonstop with glowing comments! I believe that many folks are still laughing at the many jokes, others are still remembering their past and the past of their families and still others are mulling over the Twain wisdom as you so brilliantly portrayed it, and absolutely none of us wanted that wonderful afternoon to end.

Thank you again. You brought far more than an entertaining afternoon, you brought a special joy which will last forever for all those lucky enough to be in your audience."

But, you can judge for yourself. Visit the link below to see video clips of one of Dave’s first Twain performances. You can see he has already captured Twain’s persona:
http://www.bransonsuperstars.com/theshows/breakfastwithmarktwain.html
That was 5 years ago and Dave’s portrayal of Mark Twain has evolved into a richer, funnier and more convincing performance as indicated by the comments found above. Many times teachers have given their students extra credit just for attending one of Dave’s programs. From Elvis Impersonator to Mark Twain Lecturer, the journey has been a long, wonderful and continuing quest for the complete Mark Twain story for Dave Ehlert.
After performing for 50 years, Dave has become a published Author. His first book, If I Can Dream, The Story of Being Elvis for 50 Years is Available at Smashwords.com. The year 2015 will mark 38 years since Elvis Presley died and 50 years since the author performed his first Elvis Tribute Show. This is the true story of that journey as it intertwined with the life of the World's Greatest Rock n' Roller. A 3 year old boy sings into an imaginary microphone (hairbrush) and grows up to spend a half century “being Elvis”, performing during the terms of 10 U.S Presidents. This story includes wild road trips, clinging women, lost love, found love, lost friend, midnight visits from the mysterious “Ava”, advice from Elvis on being Elvis, schmoozing with Oprah, battles with drugs and alcohol, intentional exposure to nuclear radiation, an interrogation by the Secret Service and “being Elvis” through it all. Along the way the reader will encounter a father crawling up a dirt road with his throat nearly slit, a teen beaten to a pulp by a violent gang, buddies engaging in life-threatening horseplay, an unfulfilled romance spanning 30 years, international intrigue, shady talent agents, haunting midnight visitors, a homicide, an attempted car-jacking thwarted by side-burns the bedside account of the deaths of a father and a mother, the character morphing from Elvis to Mark Twain, spending time with the Chicago Bears and playing basketball for the Chicago Bulls. The book also contains many images and links to videos relating to musical performances as it has been designed to be read on e-devices as a multi-media product.

The second book, Elvirus, Elvi-Geddon - Dawn of the Elvi Invasion is also available at Smashwords.com. Elvis is Everywhere. Elvis Impersonators are taking over every facet of our society. T.V., Movies, Social Media, Education and even Politics, threatening our way of life. A group of 100 “Elvi” in 1977 has grown to the astronomical number of over 100,000 with no end in sight. A plot originating in Memphis almost 40 yrs. ago involving a mutant gene that causes ordinary people to become Elvi. Who is involved? Grave robbers, drug pushers, the Dixie Mafia, Neo-Nazis and some high profile figures in the Entertainment World are among the conspirators.. Who or what will save the world from these "Zombie Elvi" Have you been infected? Have you been humming an Elvis Song as you've been reading this?
The third book, a suspenseful murder mystery: Lethal Lecture, the Lincoln Library Murders follows an obsessive College Professor on a Library Speaking Tour leaving a string of grisly murders in his wake. Professor Elkhart is a respected authority on Abraham Lincoln and the Civil War. He travels the country giving lectures at Public Libraries as the 150th anniversary of Lincoln’s Assassination approaches on April 14, 2015. As the date gets closer, Professor Elkhart starts to lose his grip on reality. He abandons his Ivy League Jacket with the elbow patches and appears at the podium in full character complete with Lincoln beard and stove pipe hat.
He insists the effect is for authenticity but things are just not right with the good Professor. He grows increasingly agitated at any “uncomfortable” questions about Lincoln’s Presidency. He lashes out verbally at audience members who raise any doubts about the “Pure Character of our 16th President” or have the audacity to suggest he might bear part of the blame for a war that took 600,000 American Lives. When those asking the tough questions start showing up dead, two things are certain. Attend one of Professor Elkhart’s lectures and you’ll learn something. Ask the wrong question, and you’ll die!
Dave is currently on a 50th Anniversary Tour in recognition of his half a century career as “Elvis”. He continues to bring his portrayals of other Superstars to the stage as well as educational entertainment in the personages of Mark Twain or Abe Lincoln. Also, he makes frequent Author Visits and “digital book signing” appearances at bookstores and libraries across the country. 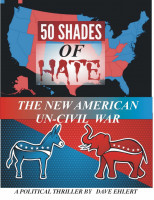 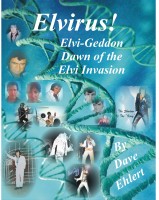 Reviews of If I Can Dream, the Story of "Being Elvis" for 50 Years by Dave Ehlert

This book shows the intimate, insightful, exciting, exhausting, life of Dave 'elvis' Elhert... Dave pours his heart, soul, blood, sweat and tears into each profomace,, paying and dedicated the greatest compliment to 'Elvis Presley'... Dave Elhert will leave a great impression on your own heart,,, knowing that Dave Elhert is genuinely, sincerely passionate, about paying tribute to' Elvis Presley '... Dave's work k is one of a kind..

You have subscribed to Smashwords Alerts new release notifications for Dave Ehlert.

You have been added to Dave Ehlert's favorite list.

You can also sign-up to receive email notifications whenever Dave Ehlert releases a new book.