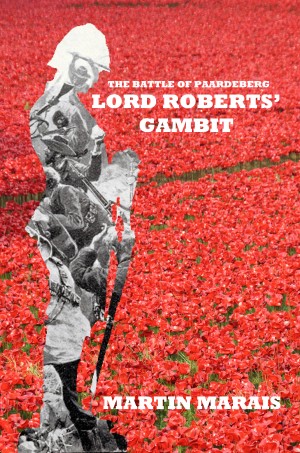 By Martin
In the first months of the Anglo-Boer War (1899-1902) the British suffered a series of catastrophic defeats. In response the British initiated an audacious manoeuvre to outflank the Boer army which sat astride the route to the besieged town of Kimberley. The move culminated in one of the bloodiest conflicts of the war, the Battle of Paardeberg. Would it be the British or the Boers who prevailed? More
My writing of The Battle of Paardeberg: Lord Roberts’ Gambit was inspired by that great work of Michael Shaara, The Killer Angels; a magnificent telling of the Battle of Gettysburg through the eyes of those involved in the conflict.

Fortunately I already had a battle in mind for a novel – the Battle of Paardeberg. Although this was a strategically important battle in the early stages of the Second Boer War (1899-1902), few people know of it. It is over-shadowed by the more famous battles of Spion Kop and Colenso and the sieges of Mafeking, Ladysmith and Kimberley.

Early in my research for the novel I came across the following quote by Jan Christiaan Smuts, a Boer general during the war, the interest is not so much in the war as in the human experience behind it. It is such a wonderful quote that I used it as the basis of the philosophical reason behind writing my novel – the story would not be a simple chronological retelling of a battle, but a journey through which I would understand the human face of early twentieth century warfare.

To achieve this I felt I needed to understand the reasoning behind some of the decisions made by those fighting the battle. Why, for example, did the British commander, Lord Roberts, march his men across 100 miles of semi-desert? This was in complete contradiction to his reputation for being concerned about the well-being of his men. Why did Lord Kitchener take control during the actual battle, when he had no right to do so? And why did General Kelly-Kenny, the most senior officer in the field, allow Kitchener to usurp his command? What was Roberts thinking when he gave ambiguous orders that allowed the conflict over rank to arise between Kelly-Kenny and Kitchener? On the Boer’s side, why did General Cronjé delay in reacting to Robert’s flanking movement? And what motivated the Boers, who were farmers, to take on the might of a professional British imperial army? Of course there is virtually no written record of any of the human factors behind these decisions, which all had significant effects on the conduct of the battle.

Therefore, the aim was to create a narrative that was compelling and poignant and which brought history to life through the experiences of those that took part in the battle. It was to be a story that would give the reader a front seat encounter with the glory, terror and wretchedness of battle and hopefully draw them in sufficiently so that they could imagine they were there themselves. The narrative style, inspired by Michael Shaara that I developed provided the perfect mechanism to do this. The historical facts created the skeleton around which the flesh of emotion, beliefs, values and relationships could be layered. It would be the personal (fictional of course) narrative of the soldiers and women involved in the bloody conflict. Through them the hopes, fears, courage, terror, exhaustion, loyalty, regrets and faith in God of ordinary people could be explored by the reader.

I hope I have created a novel that is not simply a dry chronology of a battle, but a story about the people caught up in its terrifying, unpredictable chaos. I hope it is a book which you find impossible to put down once you have started it, that entertains and intrigues and that will leave you thinking and wanting to talk about it. And if you learn a little history along the way, well that would be an added bonus!

I have wanted to publish a novel for many years and although my mind was bubbling with ideas none appealed to me sufficiently to make the time to write it. I then read "The Killer Angels" by Michael Shaara, a splendid telling of the American Civil War battle of Gettysburg. The story is told from the viewpoint of those who took part in the battle. I was intrigued by the structure of the book and it inspired me to put aside the time to write my own novel. Fortunately I had the prefect subject to hand. The Anglo-Boer War (1899-1902) has always held a fascination for me, especially the Battle of Paardeberg, which was, arguably, the turning point of the war. What intrigued me was why the British commander, Lord Roberts, a man of reputed enormous compassion towards his men, put them through such torment in a forced march of over one hundred miles across South African semi-desert and why the Boer General Cronjé responded in the way he did. It was the decisions and actions of these two men during the prosecution of this particular battle that were to change the direction of the war. My debut novel Paardeberg: Lord Robert’s Gambit is my attempt to understand the thoughts, values and convictions of some of those involved in the battle and to write down their story. Of French Huguenot stock, I was born in Kitwe, Zambia and spent most of my childhood in South Africa. I now live in England.

You have subscribed to alerts for Martin.

You can also sign-up to receive email notifications whenever Martin releases a new book.