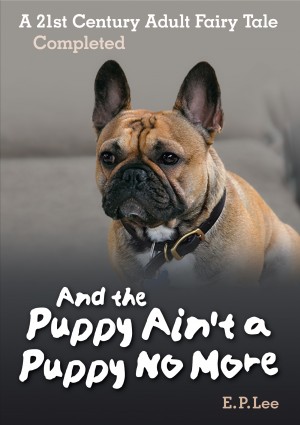 It can take forever, but things change: puppies become dogs, friends come and go, and people heal. More
Eric is finally getting free from the tumors (bodily and people-shaped), all that vermin, those Realtors, those Doctors, that tore his life apart. But as he’d be the first to tell you, if you cut out a tumor, you’re left with a hole…

But still, onwards; and Eric’s steps aren’t so unsteady anymore, and the puppy – no… the dog, is at his side.

“And the Puppy Ain’t a Puppy No More” completes the story of getting back up and moving on after being hit by everything modern American life can throw.

Born in Brooklyn and raised in Coney Island, Eric often wandered the Boardwalk in his childhood. Eric frequently wasted his allowance at the now demolished Steeplechase Park and the other dated, dowdy and declining amusements that defined Coney Island… and much of traditional society… back then.

The traditional was still IN back then. And the traditional like Coney Island had seen its glory days, its heyday, long passed. But the new hadn’t arrived yet. Just the old was fading… And so the forms still had to be obeyed. And with that Eric’s parent’s obeyed those forms and Eric was dispatched to college in Upstate NY to return to Brooklyn some four years later.

Upon graduation from college Eric bounced from job to job until the Graphic Arts caught his creative eye and a new career began. With his first graphics production position under his belt Eric moved in to Manhattan some two years later never to live in Brooklyn again.

Success built on success as corporate stints in California brought about even greater successes leading to Eric’s eventual New York City return and the opening of his own Graphics Agency in Manhattan. That enterprise ran successfully for over twenty years.

Now out of industry entirely, Eric is happy to enjoy the perpetual Florida sun and write.

You have subscribed to alerts for E. P. Lee.

You have been added to E. P. Lee's favorite list.

You can also sign-up to receive email notifications whenever E. P. Lee releases a new book.