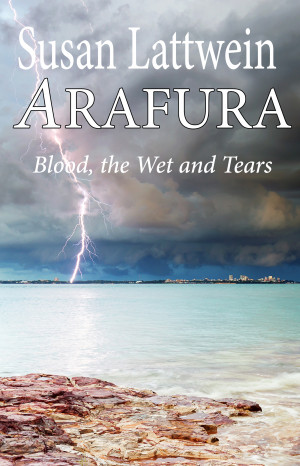 Arafura - Blood, the Wet and Tears

Rated 4.00/5 based on 1 review
Kat is engaged, THEN meets her drop-dead gorgeous soul-mate. But is he a murderer? Worse still, he has issues...

Kat, a Darwin schoolteacher in a stale engagement, is obliged to show a mysterious stranger around town. Their instant attraction is complicated by guilt, denial, the hero’s PTSD, and his involvement surrounding a dead body. More
Sensible schoolteacher Kat is planning to marry whenever her long-term fiancé finds the time. When the enigmatic and unpredictable Adam arrives in Darwin, Kat is jolted well out of her comfort zone, and it doesn’t help that her wayward hips are determined to unite with Adam’s.
Despite loyal intentions and a corpse suspiciously connected to Adam and his traumatic military past, he and Kat must first wrestle with their emotionally fraught, instant attraction.
Arafura will appeal to female and male readers who enjoy mystery and romantic suspense with dark edges—and a few laughs.
Download: epub mobi (Kindle) pdf more Online Reader
lrf pdb txt
Price: Free! USD
Add to Library
Create Widget
Tags: womens fiction ptsd australia contemporary romance emotional intimacy military romance humour humor rural romance romance and suspense
About Susan Lattwein

Susan lives in Brisbane, Australia, with her husband, two terriers and various rescue cats.
She released her first romantic suspense novel ARAFURA - Blood, the Wet and Tears in 2012, and ARAFURA - Unfinished Business in 2014; both to 5 star reviews on Amazon. The series, set in Darwin, is about a schoolteacher who must grapple with the impact of PTSD on the man she won’t allow herself to love. He’s a military man with a past, and that past comes back to haunt both of them. The second novel has more action than she expected; accompanied by sex, dynamite, and hilarity – thankfully not always at the same time.

Her short story On The Inside was published in the Pure Slush story serial Don't Kill Me, I'm In Love (2015).
Window to the Soul was also chosen in 2015 for submission to the SA Writers Centre Lit Bulb Festival.

In between teaching, Susan is currently writing the third novel in the ARAFURA series. Because words are fun..

About the Series: ARAFURA

Susan Lattwein’s ARAFURA romance-suspense series, set in Darwin, is about a schoolteacher who must grapple with the impact of PTSD on the man she won’t allow herself to love. He’s a military man with a past, and that past comes back to haunt both of them. But it’s not all dark, there’s plenty of action and laughter along the way.

Reviews of Arafura - Blood, the Wet and Tears by Susan Lattwein

Somehow I started reading this book without realising it was going to be a romance. With the mention of the dead body in the blurb, I latched onto that and expected something a bit more mystery-y (I know that’s not a word). Now I am not a big romance reader, though I do delve occasionally when I know what I’m getting into. So it wasn’t really until two-thirds of the way through the book that I could let go of this naive idea it would suddenly turn into a mystery and found myself really getting into the romance instead.

However I’d managed to mislead myself aside, I did connect with main character Kat from the get-go. I want to be a teacher someday, so I was really into Kat’s experiences in the classroom and how she connected with students. The book also didn’t shy away from the troubles that can crop up in the profession, so I loved all the little subplots about the students’ families and fundraising for the school. Kat’s family are a great bunch of characters too – especially Lily. Lily is adorably awesome.

There were some trippy things going on this story that are worth mentioning, as I was surprised the story went there, but not disappointed in any way. There was enough scepticism and empathy from Kat to make her reactions believable, so I was happy to go with it. I won’t spoil it by saying what ‘it’ was, exactly, but just be aware: occasional trippiness.

The setting for the book was really what made it for me. The author described Darwin and the ‘build-up’ (which is what the locals call the horrid humidity that occurs for days and days before a big cyclone, as the book explained) so well that I could clearly see and feel the environment surrounding the characters. I’ve never been to Darwin, but we get our fair share of hot summer storms in Queensland. I know how oppressive that humidity can be, and it was great to see the sheer awkwardness of trying to go about your day when you’re just pouring sweat and your mind has been shot by the heat. Those little details tend to be forgotten in favour of the plot, so it was nice to have the environment really support the plot in that way.

I really enjoyed this book, and hopefully the sequel will be out soon. Thumbs up!

You have subscribed to Smashwords Alerts new release notifications for Susan Lattwein.

You have been added to Susan Lattwein's favorite list.

You can also sign-up to receive email notifications whenever Susan Lattwein releases a new book.