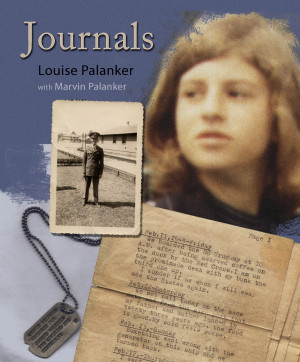 By Louise Palanker
A young girl takes a forbidden journey into family history, after finding and secretly reading her father's World War II Journal. More
It's 1970, in Buffalo, NY and 12-year-old Lanie Spurdle is haunted by some very tricky questions, like:

What are boys really thinking about girls and love and sex?

Why are my parents always so moody and angry at me?

How can people hate each enough to kill?

Of course, she's equally troubled by the more delicate questions like, "Why do I have to wear a bra?" "How do I escape the attack of the Middle School Queen Bee?" and "Does Clayton Murray like me as much as I like him?"

But as she begins to write in her journal and as she discovers and secretly reads her father's World War II journal, Lanie finds that her parents, her family and her world are coming into sharper focus.

Louise Palanker received her teaching degree at SUNY Brockport, NY and then taught for a year before venturing west to Los Angeles to pursue a childhood dream of making her way in the entertainment industry.
“As a kid from suburban Buffalo who had been to a taping of The Carol Burnett Show at 15, I set my sights on securing a job as a studio page,” says Louise.
That took some effort but ultimately, she landed a job as a page for the Normal Lear sit-coms. That led to a position writing and producing for PM Magazine which introduced Louise to Rick Dees, who hired her to write The Rick Dees Weekly Top 40. At KIIS-FM, Louise met Disc Jockeys Tim Kelly and Steve Lehman with whom she formed Premiere Radio Networks.
Premiere went on to dominate the radio syndication market and was sold to Clear Channel in the late 90s.
This gave Louise the opportunity to launch a foundation which benefits children's causes. She also began a career in stand up comedy and devoted more of herself to her original calling of teaching and mentoring kids.
Louise combined her teaching degree with her love of comedy and created The Kids Comedy Club, a stand-up comedy program for children, at Los Angeles area Boys & Girls' Clubs and The Jewish Federation of Greater Santa Barbara where kids learn to write and perform stand up and Improv comedy.  Through this program, Louise has been teaching and mentoring children for 11 years.

Louise also wrote and published a young adult novel called "Journals: Middle School Love & War," which she then developed into an iPad/iTouch/iPhone app in 2009.

Journals has twice been chosen as an iTunes staff pick and has received over 100,000 downloads.

Utilizing app technology, that little book has launched a community devoted to helping kids grow up. Through Journals, kids can not only read the book (based on Louise's own awkward adolescence) They can write in the own diary, listen to a weekly podcast and ask Louise questions about everything that life is throwing their way: school, parents, friends, bullies, boys, girls, dating, love, sex, relationships, and other complicated things like life.

Louise answers questions, daily, from kids the world over on these very topics. She is closing in on 3,000 questions asked and answered.

“My approach starts with love but each response is infused with good sense, good safety and a boost of hope and inspiration,” reports Louise.

“I want them to know that anything is possible if they truly strive, learn to love themselves and make good, solid choices.”

The questions and answers are posted within the app and online at Journalsnetwork.com

Journals: Out Loud, The Podcast brings this dialogue to a whole new level. Each Tuesday night at 8pm, Pacific kids who take an active part in the app all week, are flocking to the live feed and the chat room (journalsnetwork.com/listen) to have their voices heard and their questions answered.

“The Journals Community has become very supportive,” says Louise. “It's a safe place to learn that your feelings matter and that you are not alone.”

Parents are now discovering that Journals is the place to go to learn what your child is really thinking and to open up a healthy dialogue about topics that are tough for parents to broach with their kids.

“I believe that parents are the heroes,” says Louise. I never had kids of my own and I think it's because my role in life is that of Mentor. I've always been driven to be that reassuring voice that helps a kid past a rough patch or inspires her to turn around and head in a more positive direction.”

Through Journals, Louise is able to do exactly that for kids worldwide. Go to Journalsnetwork.com and join the conversation.

You have subscribed to Smashwords Alerts new release notifications for Louise Palanker.

You have been added to Louise Palanker's favorite list.

You can also sign-up to receive email notifications whenever Louise Palanker releases a new book.