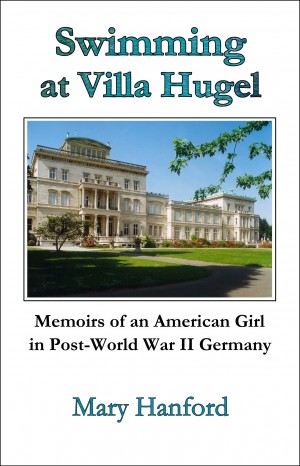 As much as this is a revealing of previously hidden history, it is the compelling telling by the author of her philosophical coming of age living with multiple nationalities, and attending international schools, even enduring caning while attending a school for British children. Already known for her "word portraits" in her poetry, which has been published in various countries, and in her magnificent first novel,Dr. Sally's Voodoo Man, laced with beautifully crisp word images. As a lady considered a senior citizen by age, she is emerging as one of America's all-around talented writers of literature.

Mary Hanford was born in Washington D.C., a city noted for its international connections, and which symbolized a life marked by travel in Europe, Asia and Africa.

Just before she turned ten years old, her father obtained an important diplomatic position in post war Germany as head of the British/American Coal Commission, the allies' attempt to bring heat to devastated Northwest Germany.

The Coal Commission's offices were in Villa Hugel, the industrialist Krupp’s mansion. Because her parents were absorbed by diplomatic duties, Mary Hanford made close German friends and took them with her to the swimming pool in Villa Hugel and also formed bonds with the servants who looked after her.

Those three years imprinted in her an international outlook and an awareness of moral ambiguities despite nationalities. Later, she became a college professor and author and traveled teaching on Fulbright grants, Global Perspective grants and directed several student abroad programs. She has published over fifty poems, a poetry collection, Holding to the Light; also, a critically-acclaimed first novel, Dr. Sally’s Voodoo Man.

You have subscribed to alerts for Mary Hanford.

You have been added to Mary Hanford's favorite list.

You can also sign-up to receive email notifications whenever Mary Hanford releases a new book.