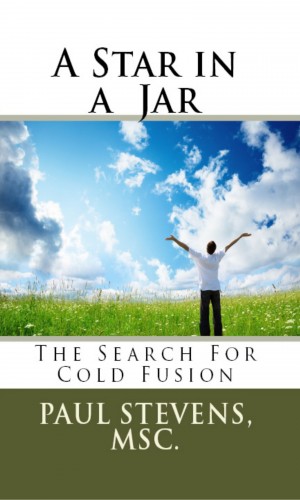 A Star in a Jar: The Search for Cold Fusion

There is a favorite line from my novella Dinner Party For Eight in which Angela asks Harry:

“What do you think I am?”
Harry considered this for a moment. What was she actually?
“Well I suppose you are a very beautiful cook.”

So if I have to answer the same question what am I actually? I would also need to consider this for a moment. I would like to say I’m an ex astronaut, have more degrees than a thermometer, have competed in the Tour de France without any EPO, surfed Teahupoo in Tahiti and emerged unscathed, sailed round the world, am an ace Alpine skier, am a member of Mensa, have a beauty queen wife and gorgeous kids, and started my own corporation which has listed on NASDAQ. I could go on but like Arnold Schwarzenegger I don’t want to boast.
Well to be honest, I have gone some of the way towards all those things. I do have a letter from Wernher von Braun, I do have three degrees in Physics, I have flown in a jet plane (Emirates Air), I do cycle the mega steep hills here where I live but unfortunately can’t get EPO anywhere, I am a keen surfer who has almost managed to break his neck, I am an ocean going skipper and I did own my own yacht though if it was me I wouldn’t sail with me as captain, I do ski but you need to get out of the way, I do have a beautiful wife (though her agreeing to marry me has to be my biggest piece of luck ever) and two great kids, I do have my own software business but no stock exchanges alas and I would like to take the Mensa test but I’m pretty sure I would fail and then I wouldn’t be able to live with that so I would rather rationalize. I live in that sapphire city – Cape Town.

Reviews of A Star in a Jar: The Search for Cold Fusion by Paul Stevens

You have subscribed to alerts for Paul Stevens.

You have been added to Paul Stevens's favorite list.

You can also sign-up to receive email notifications whenever Paul Stevens releases a new book.