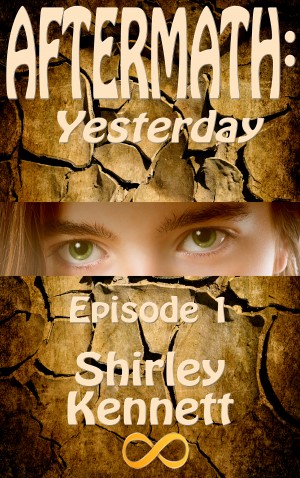 By Shirley Kennett
Sixteen-year-old Anna Hart flees a deadly situation in a failing human colony on the planet Silva. Using her skills with an ancient weapon and her empathic ability, she struggles through danger and betrayal, searching for a place where love and hope can thrive.

This Episode is the first of five in the novel Yesterday, the first book in the Aftermath Trilogy. The rest will be released as written. More
In this Young Adult science fiction tale, sixteen-year-old Anna Hart flees a deadly situation in a failing human colony on the planet Silva. Using her skills with an ancient weapon and her empathic ability, she struggles through danger and betrayal, searching for a place where love and hope can thrive.

Please note: This Episode is the first of five episodes that make up the novel Yesterday, the first book of the Aftermath trilogy, and is offered as an introduction to the characters and world in the sweeping story of Aftermath. Subsequent Episodes will be released as written to fill out the book in serial fashion.

Shirley, writing under the pseudonym of Dakota Banks, writes the Mortal Path series of paranormal thrillers featuring Maliha Crayne. The books are based on a woman’s battle for her soul amid ancient Sumerian myths come to life in modern times. The Mortal Path ebooks are published by Harper Voyager.

Shirley has published in novel, short story, and article formats. She has contributed chapters to books about writing and worked on a progressive mystery with a dozen other authors. She has taught workshops about writing online and in person, and is a frequent speaker at conferences. She has judged short stories for a Mystery Writers of America anthology, and judged for the Edgar Awards several times (twice as committee chair). She is a founding member and past president of the St. Louis Chapter of Sisters in Crime, a member of the Mystery Writers of America, Horror Writers Association, the American Crime Writers League, Science Fiction and Fantasy Writers of America, and International Thriller Writers (Vice President of Membership). In her spare time, she manages to get some writing done.

Before beginning her writing career, Shirley wore a number of hats, including those of corporate analyst, clinical systems programmer, independent computer consultant, and pet store employee (the one who cleans the cages), but her writer's hat is by far the most comfortable—and most satisfying—of them all. She has been a mystery/thriller fan as long as she can remember, probably a result of growing up in a converted turn-of-the-century funeral home.

With adopted sons from Peru and Ethiopia, she’s experienced both the rewards and the difficulties of having a cross-cultural family. Shirley is a graduate of the Washington University School of Engineering in St. Louis, Missouri, and lives on the western fringe of St. Louis with her husband, two sons, and two cats.

You have subscribed to alerts for Shirley Kennett.

You have been added to Shirley Kennett's favorite list.

You can also sign-up to receive email notifications whenever Shirley Kennett releases a new book.