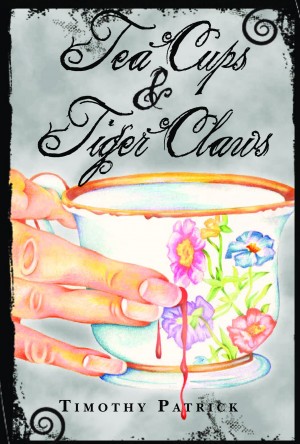 By Timothy Patrick
Rated 5.00/5 based on 1 review
In 1916, the birth of identical triplets excites a small town. Soon the sisters are split up — two are sent to live in a mansion, and the third is abandoned in a work camp. Over the next 50 years, their lives will intersect in surprising ways. A fascinating novel about love, ambition, and the dark impulses of human nature. Kirkus Reviews calls it "An engagingly twisted family saga." More
First comes the miracle and then comes the madness. The miracle is the birth of identical triplets, and the madness is all about money, of course. The year is 1916 and the newborn baby girls have become pint-size celebrities. Unfortunately, this small portion of fame soon leads to a much larger portion of greed, and the triplets are split up—parceled out to the highest bidders. Two of the girls go to live in a hilltop mansion. The third girl isn't so lucky. She ends up with a shady family that lives in an abandoned work camp. That’s how their lives begin: two on top, one on the bottom, and all three in the same small town. And when their worlds collide, as they must, the consequences are extreme.

Tim Patrick learned at an early age about living on both sides of the tracks. His family scraped to pay the rent but he received his primary education at a private boarding school, the result of smooth talking parents and a generous scholarship. On visiting day Tim watched the parents of his schoolmates arrive in limousines and Lamborghinis. His parents arrived in a utility van that said "Patrick's TV Repair" on the sides.

In “Tea Cups & Tiger Claws,” his first novel, Patrick continues with this childhood theme as he introduces forbidden mountaintop palaces and the characters who try to sneak into them. It's a family saga that spans three generations and takes you on a wild ride from one side of the tracks to the other.

In “Death of Movie Star,” the author’s second novel, he takes you backstage to meet the types of film stars that the whole world loves and hates—sometimes simultaneously. There are the ambitious divas, the wisecracking sidekicks, and the really frightening ones who just might be playing themselves.

In “Ollie Come Free,” Patrick unites his fondness for the American family saga with the fascinating phenomenon of acquired savantism, where a person can get bonked on the head and wake up with a new and amazing talent…and the brain damage that always accompanies it.

Tim is a graduate of UCLA. He and his wife live in California and are the parents of two grown children. In his spare time, he enjoys aviation, bicycling, and experimenting in the kitchen.

Timothy Patrick's TEA CUPS & TIGER CLAWS is a fractured fairytale, a darkly funny parable about haves and have-nots, takers and givers, and what it's like to live in the shadow of great mansions on the Hill. The story is divided into three parts. The first revolves around three identical triplet sisters born to a white trash mother and her alcoholic loser husband living in a garbage-littered dump. Two of the babies - Abigail and Judith - are adopted by "the Duchess," who lives in one of the town's two palatial Victorian mansions; the third sister - Dorthea - grows up in poverty with her parents in a run-down shack, with little hope of anything better. Abbey and Judith become young ladies living in the lap of luxury, while Dorthea learns the lesson her parents teach her - "when love isn't an option, sometimes the next best thing is hate." She vows to get revenge on her sisters, the Duchess, and the Newfields who live in Sunny Slope Manor, the grandest estate in town.

In the second part of the story, the focus shifts to the second generation, as Abbey's daughter Sarah, Judith's daughter Veronica, and Dorthea's adopted son Ernest become pawns in Dorthea's continuing quest for vengeance. And by the third act, these enemies play out their diabolical and twisted roles as Dorthea moves to rid herself of all of them, taking what she's wanted all along - Sunny Slope Manor for her own.

At its heart, this is a novel about human depravity, and our very American fixation with wealth, power, and social standing. Patrick's convoluted saga spans over sixty years, with Dorthea's simmering hatred fueling the action. In another writer's hands, this story could have played out like an American Cinderella story, with poor Dorthea left behind as her sisters become wealthy and powerful. But Dorthea is hardly sympathetic, and she's no Cinderella. Although she's smart enough and cagey enough to manipulate her way into a fortune of her own, it can never give her what she really wants - the status of her sisters, and the right to live on the Hill with the "old money" crowd. Her bitterness is reminiscent of Dickens' Miss Haversham, who uses her ward Estella in a twisted plot against the hapless Pip, or perhaps Bronte's Heathcliff, who works to destroy not only the people he believes have betrayed him but their children as well (including his own son). As skillfully as Dickens or Bronte, Patrick brilliantly illustrates the results of allowing hatred and a thirst for vengeance to direct the course of one's life.

TEA CUPS & TIGER CLAWS is a beautifully written novel, with a sharply satiric style that works to propel the saga of these characters from twisted fairytale to morality play, without ever once getting preachy. There are characters here to root for - Sarah, for one, who manages somehow to rise above the craziness of her family and the town she lives in - and others to despise (including the noxious Veronica, who would give Roald Dahl's Veruca Salt a run for her money in the spoiled brat department!). And the town Patrick has invented, with its mansions on the Hill (the Hill the working classes are always gazing up at with awe and envy), is totally believable, even in its stereotypical familiarity. The rich are always envied, the poor are always bitter, and hatred really is easier to latch onto than love when the good life seems so very far away. This is a smart and savvy novel that will draw readers in from its first page. I highly recommend it.

[Please note: I was provided a copy of this novel for review; the opinions expressed here are my own.]

You have subscribed to Smashwords Alerts new release notifications for Timothy Patrick.

You have been added to Timothy Patrick's favorite list.

You can also sign-up to receive email notifications whenever Timothy Patrick releases a new book.