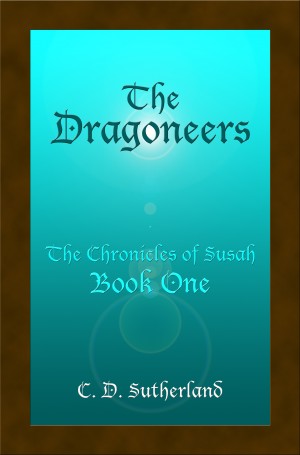 By C.D. Sutherland
Rated 5.00/5 based on 7 reviews
When eighteen-year-old Susah leaves home against her parents’ wishes to become a dragoneer, she discovers the life of a warrior is one of hard work and dedication to a cause greater than life itself. More
The Dragoneers is an amazing adventure about Susah, a talented young woman, who refuses to join her three brothers in helping her father advance the family business. She wants to do something exciting with her life. While this story could have been set in any time, the fantastical world she lives in amplifies each step nearly beyond the bounds of imagination.

Against her parents' wishes, Susah leaves home on a quest to become one of the dragoneers, an elite fraternity of warriors sworn to defend the ancient garden of Eden against all trespassers.

Meanwhile, deep in a lair inside of Sethopolis' roughest neighborhood, an evil giantess dreams of seizing the secrets of immortality and other powers, which she believes are hidden within the walls of the forbidden garden. Realizing she can't achieve her dream with her own resources, she joins forces with a fallen angel, nearly as old as time itself.

Seemingly unaware of the dangers awaiting her, Susah faces the greatest of all challenges. With the fate of the human race depending on their performance, will the dragoneers succeed in defending the garden of Eden against the forces of evil? And even if they succeed, will Susah survive the pivotal battle of good verses evil?

This adventure builds on the little we know about the antediluvian world and overlays it with a blend of technology, supernatural powers, fire-and-ice-breathing, flying dragons, giants, and martial arts to begin Susah's adventure to discover herself. Climb aboard and hang on for the ride of your life.

This is the first book of the exciting series called The Chronicles of Susah, which has introduced a new genre to literature. Antediluvian steampunk is a retro-futurfantasic genre that synthesizes Literary/Biblical Fiction with traditional Science Fiction/Steampunk.

Charles David Sutherland signs his books as C.D. Sutherland. Across three decades, he flew B-52s for the Air Force, where he was known as The Chuck, then he turned novelist with his "The Chronicles of Susah" series. Those novels shook-up the fiction world as they defied conventional classification. They blended action and emotional tension with technology and spiritual intrigue in a coming of age story wrapped in an epic adventure set in the antediluvian age marking the birth of a new literary genre. His readers called it Antediluvian Steampunk and declared C.D. Sutherland to be its father. For all ages, if you like Biblically-based action adventures, then look at his books—you’ll be glad you did.

Born in the Virginia foothills to a coalminer’s son, who long ago joined the Navy to escape a life in the dark Appalachian mines, C.D. Sutherland also joined the military. After high school, he served in the Air Force for thirty-two years, seeing much of the world, flying jets and doing other such things most men have only dreamed about doing.

C.D. Sutherland married the love of life, and they are well into their 43rd year. The two of them are raising a couple of their grandsons. While C.D. Sutherland is a Baptist deacon, author, and an ACFW Louisiana officer and project manager, he is also the owner and executive editor of Narrow Way Press, LLC, a small independent publishing company. His philosophy for life is to "do the best you can with what you have to work with.”

His power verse is:

“I can do all things through Christ which strengtheneth me.” (Philippians 4:16 KJV)*

Also in Series: The Chronicles of Susah

Reviews of The Dragoneers by C.D. Sutherland

How happy I was to discover this book was a series because the end of the book left me wanting more. his book really grabs you from the start. The setting is biblical pre flood. Mr Sutherland takes the reader on an unforgettable journey through a fantastic land filled with dragons, giants, demons, and Noah's family. There is good and definitely evil. The rough characters are so vividly described that you will be amazed that there is no foul language. The battle sequences are incredible, highlighting military tactical and strategic attention to detail. Great book.

Powerful story about an amazing young woman. Unique story line introduces Susah, who has an interesting family, you might have heard of them before. Anyway, her struggle to find herself as she pushes through barriers of life, dragons, and demons is a pleasure to read. I've read the other two books and they are great sequels. Iwill post my reviews on them shortly.

Best Biblical Fiction I've read. I guess the steampunk is some new way of saying "science fiction story set in the past" but what ever genre you decide to put these Dragoneer books in, they are excellent adventures for readers of all ages. Not preachy at all, but if you're looking for it you can the Bible elements woven through the story. I waited to read all three novels before commenting on this first one, because I didn't want to make a mistake. having read the three books, I have to say they are extremely good stories, which happened to be based on the antediluvian age. Go Susah, I want more.

This book is exciting and well written. Interestingly, this book is free here and at B&N, but listed for 99 cents over at Amazon. Less than a buck is practically free, but usually Amazon matches prices. I guess they have enough customers to suit them. I loved this book and it's sequel, I'm almost finished with book three. Very good stuff.

Susah is one tough cookie for an innocent village girl. I'd not want to meet Lilith in a dark alley nor an illuminated shopping mall, very dangerous woman in orange. A great adventure.

Dragons, giants, fallen angels, and an elite group of humans who stand in the way of evil. A fascinating story, where the action does not stop. If you like epic adventures, this story is for you.

I've read all three books of this series and I'm glad to see the books on Nook, having escaped the Kindle bubble where it has been for years. The cocktail of traditional biblical fiction enhanced with literary science fiction steampunk is a refreshing escape for overused and predictable stories.  The Dragoneers is void of profanity and doesn’t have gratuitous sensuality but it does have emotional tension and physical conflict. It incorporates Biblical history to support the fantasy elements without being preachy. Someone expecting a Sunday school story will be disappointed, but those who enjoy high adventure will be pleased.

You have subscribed to alerts for C.D. Sutherland.

You have been added to C.D. Sutherland's favorite list.

You can also sign-up to receive email notifications whenever C.D. Sutherland releases a new book.