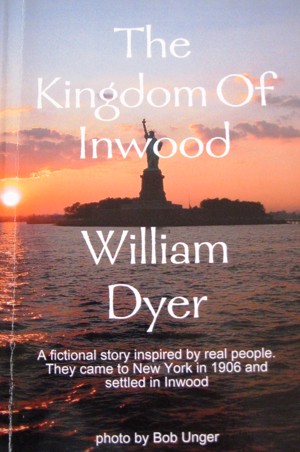 The Kingdom of Inwood

By Bill Dyer
The Unger family of eight comes to America on an immigrant ship, passing through Ellis Island.
You'll wonder about the mysterious man wearing the black cape. Fall in love with the precious Irish girl, Dolores, and her eyes as they light up a young man's life. Experience for yourself, a wondrous story about wholesome people.

Writer, author, or storyteller - he prefers the latter. He began inventing stories about 22 years ago for his grandchildren. Today, they range in age from “due next month” to 28 years old. His stories are centered on family. The stories he puts on paper are meant to remind the older folks about the past, and tell the younger folks what the past was like. Grandmothers, grandfathers, parents, and young folk are the targets of Bill’s tales. "The Girl on the Balcony" has some content not suitable for youngsters.

He was born in 1936 in Savannah, Ga., and is now retired just a few miles from there. He lived in the south until he was five years old. It was then he started his love affair with the Inwood section of New York City. He lived in Inwood until the age of 17, at which time he became a paratrooper. That filled a dream that was born when he saw the 82nd Airborne march in the Victory Day parade down Fifth Avenue in New York City at the end of World War 2. He has always been proud of the fact, that during his time in uniform, he served with men who jumped into Normandy on D-Day.

He married the girl who lived around the corner, Irene, in 1954. The wedding took place in Inwood, in the same church they received their First Communions and Confirmations, Good Shepherd Church. They had five children and the eleventh grandchild is knocking at the door.
"Oh! Come on in sweetheart. Has Grandpa got a story for you."

You have subscribed to alerts for Bill Dyer.

You have been added to Bill Dyer's favorite list.

You can also sign-up to receive email notifications whenever Bill Dyer releases a new book.