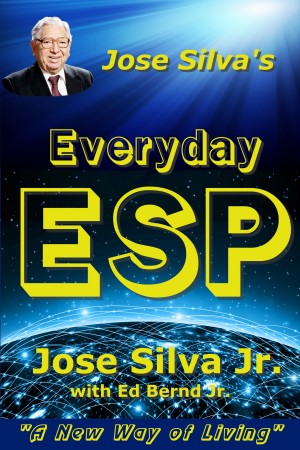 By Jose Silva Jr.
& Ed Bernd Jr.
Are you a natural psychic and don't know it? Probably. Have you ever thought of somebody, the phone rings, and it’s that person? Or perhaps you say something at exactly the same time as a friend says or thinks it. Most people have. This is your natural God-given intuition at work. This book will help you develop and learn how to use your natural ESP to help you in every area of your life. More
How often do you use your natural ESP? For example, have you ever experienced:
*A hunch that pays off?
*A dream with useful information?
*Unexplained coincidences?

Jose Silva's Everyday ESP, by Jose Silva Jr. with Ed Bernd Jr., will help you not only learn how to tap into the natural ability of ESP but it will also help you understand hidden information that you can use to make better decisions in all areas of your life. Imagine if you had a guide who actually knew what lies ahead for you, and who could guide you to success, happiness, and fulfillment. In Jose Silva's Everyday ESP you will learn how to use your ESP to obtain guidance and help from higher intelligence to help you make better decisions and to fulfill your life's mission.

Learn to use the scientifically researched and proven Silva Dynamic Meditation System to help you in all areas of life: health, relationships,

success, making good decisions, and finding your purpose in life. Wouldn't it be nice to have guidance from higher intelligence as to how to achieve all this?

For the first time in any of the many books released by Jose Silva, this book will contain a link to free online audio recordings that will speed up the process. The audio recordings include the Silva Centering Exercise, a conditioning cycle that Jose Silva invested 22 years of scientific research to develop. In just a few hours you can be functioning at the powerful alpha brain wave level.

In addition to the resources in the book and on the audio recordings, you can call on a network of Silva UltraMind ESP Systems Instructors throughout the world to help you. Plus, you will also be provided with a link to a special Website with additional resources and provisions to get personal answers to questions about using Jose Silva's UltraMind ESP System to help you live the successful life that higher intelligence envisioned for you.

2nd Edition revised and updated by the Authors in August 2014.

Jose Silva Jr. (known as Joe or Joe Jr. to his friends) is one of the last links to his father’s pioneering research that led to the development of a system to help everyone develop their natural God-given ESP, so they can use it and benefit from it every day, in every area of life.

Joe was born in 1941, the first of Jose and Paula Silva’s 10 children. When his father began to experiment with hypnosis in the late 1940s, using Joe’s younger sisters and brothers as subjects, Joe was there to help and to document much of the research. He recorded prenatal age regression sessions when his siblings went back to so-called “past life regressions.”

Joe was in the U.S. Navy serving in Vietnam when his father began taking his findings to the public via a series of workshops in the mid 1960s. There was a huge demand for Jose Silva’s “Mind Control” system, as it was called it back then, so in 1967 Mr. Silva asked Joe to come back to Laredo as soon as he could to help take care of the electronics repair business.

When the new seminar business began to grow, Joe helped manage it too, and was one of the three incorporators of Silva International, the corporation that still manages the original course.
In 1995, Mr. Silva nominated Joe to take over the presidency of Silva International. In 1998, when they set up a separate company to manage the new Silva UltraMind ESP System, Joe was named president of that company and assigned the majority ownership.

Throughout the tremendous growth of the Silva programs from their modest beginnings in Laredo, Texas, to more than 100 nations around the world, Joe has been the most consistent factor, along with his father and his Uncle Juan, who both passed on in 1999.

Joe has been married to his wife, Ruth, since 1967. They have two children, David and Ruthie, and five grandchildren. Joe holds a black belt in karate, and served as a consultant to Ed Bernd Jr. in developing the Silva Star Athlete program and the book "Think and Grow Fit—Jose Silva's Guide to Mental Training for Fitness and Sports." 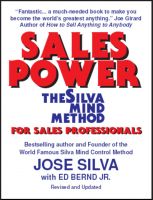 You have subscribed to alerts for Jose Silva Jr..

You have been added to Jose Silva Jr.'s favorite list.

You can also sign-up to receive email notifications whenever Jose Silva Jr. releases a new book.