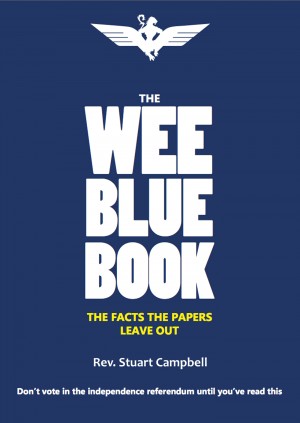 By Rev. Stuart Campbell
Rated 5.00/5 based on 2 reviews
Scotland's referendum 2104 - the facts the papers leave out. Don't vote in the independence referendum until you've read this. More
Scotland is served by 37 national or daily newspapers. Not a single one supports independence. (The only publication to back a Yes vote is a weekly.) Almost all of them are owned and/or controlled outside Scotland. When Scotland faces a decision as important as the one it’ll make on September the 18th 2014, the press being so overwhelmingly skewed to one side is a problem for democracy.
To be blunt, a great deal of what Scots have been told about independence in the last few years by Unionist politicians and the media is a tissue of flat-out lies, half-truths, deliberate omissions and misrepresentations. In this book - using fully-referenced, impartial sources that you can check for yourself - we’ll fill in the gaps so that you can see the whole picture.
Download: epub mobi (Kindle) lrf more Online Reader
pdb
Price: Free! USD
Add to Library
Create Widget
Tags: scotlandreferendum 2014scottish independenceindpendence

Reviews of The Wee Blue Book by Rev. Stuart Campbell

Even with the Scottish independence referendum fast approaching, people are still complaining that they've not had enough information to make the most important decision in Scotland's history. There are two reasons for this:

1. Unionist politicians have spent the last two years scaremongering to the electorate rather than entering into a constructive debate.

2. Newspapers and television news programmes have withheld or deliberately distorted information to benefit the No campaign.

The Wee Blue Book aims to fully inform readers about the issues surrounding the referendum. Featuring fully referenced sources to back up the information presented, the book deals with subjects like the economy, defence, and international relations in an easily readable format.

If you have a vote in the independence referendum on the 18th of September, this book will help you reach a fully informed decision before you vote.

(review of free book)
Jess Hopkins reviewed on Sep. 3, 2014
(no rating)
Concise and to-the-point, this book, which "takes a couple of hours to read", uses direct quotes from UK/BT sources to debunk the myths bandied about as part of project fear. Indispensable reading for anyone without a bucket of sand to hide their head in on September 18th.

You have subscribed to alerts for Rev. Stuart Campbell.

You have been added to Rev. Stuart Campbell's favorite list.

You can also sign-up to receive email notifications whenever Rev. Stuart Campbell releases a new book.