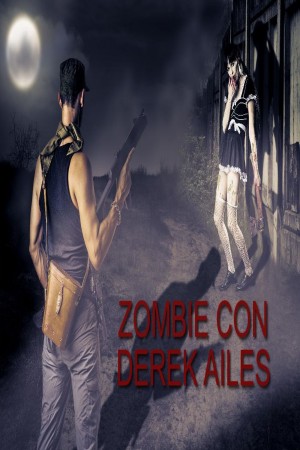 By Derek Ailes
Rated 2.00/5 based on 1 reviews
A zombie outbreak at a horror convention, a Zombienado and a gargoyle terrorizing a small town in Texas are the latest tales from the demented mind of Derek Ailes. Will there be any survivors? It's a fast pace horror thrill ride from beginning to end. More
Zombie Con brings you three horror short stories from Derek Ailes. Zombie Con: Norman is excited to attend the Walkers Zombie Convention in Chicago. He finally gets a chance to meet his favorite actress Lauren Callas. During the convention a real zombie outbreak takes place. Who is a zombie or a fan decked out in a zombie costume? Zombie Twister: What happens when a group of storm chasers encounter an EF5 tornado infested with zombies while filming a documentary special? Will they survive the zombies or the tornado? Gargoyle's Curse: A small town in Texas is being terrorized by a hungry gargoyle. Will Sheriff Tavenier be able to stop the gargoyle before it kills everybody in town? Find out in these chilling tales from a horror mastermind.
Download: epub mobi (Kindle) pdf more Online Reader
rtf lrf pdb txt
Price: Free! USD
Add to Library
Create Widget
Tags: zombies zombie action zombie book zombie anthology zombie apocalypse undead zombie apocalpyse zombie apocalypse horror zombie ebook zombie apocalypse survival zombie best seller
About Derek Ailes

I am a science fiction & horror writer from Valparaiso, Indiana. I also love to write horror stories about zombies and cats. I am also a political satirist. In 1985 I wrote my first short story: "The Day It Rained Candy." I also started writing a science fiction series called "Power Force." In 1994 I published my first short story: "The Night Of the Living Redheads." I am currently writing horror short stories with my brother, Mark Cusco Ailes, for the horror collection: "The Second Journey Into The Unknown."

I liked the idea of a real zombie outbreak happening at a convention, where people are already dressed up as zombies and other monsters. However, I don't feel that it was executed as well as it could have been.

It sets the scene with Norman being there as a VIP guest which should mean getting ahead in line for everything he wants-except there are so many VIPs that the lines are longer than expected and the lack of planning from the ZombieCon people becomes obvious. He even meets a girl who is just as much of a zombie fan and become friends in the queue. We also have the subplot where a terrorist steals a virus and is planning to sell it when the plan goes wrong and it is released. This was all quite interesting.

Sadly the rest of it becomes rushed. A person goes into a room and is eaten. Next person goes into different room and is eaten. Someone looks for first person and is eaten. It follows a somewhat repetitive description of how each person meets their doom. There is no tension to it or original moments as the zombie virus spreads. It just needed a bit more depth and excuse the pun, for the story to be a bit more fleshed out. The lack of detail gives the impression that the author was in a rush to get it written by a certain page number so it was a bit disappointing. If the author went back and added a bit more description and thought to it, it could be a decent story. As it is, it was way too short and underdeveloped for me.

You have subscribed to alerts for Derek Ailes.

You have been added to Derek Ailes's favorite list.

You can also sign-up to receive email notifications whenever Derek Ailes releases a new book.