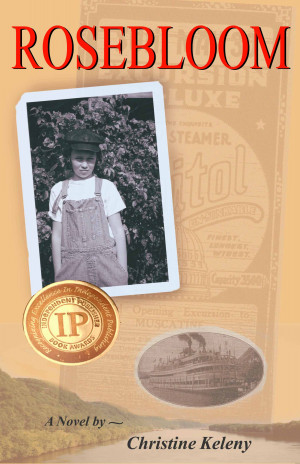 By Christine Keleny
Rated 4.00/5 based on 1 review
Rosebloom - An Award Winning historical fiction novel and coming of age novel set in the late 1930s. Step into Rose's world, where a young Wisconsin farm girl who runs away from home. Rose is looking for adventure, what she finds is much more.
Midwest Book Review calls Rosebloom: "... an excellent blend and deftly written look at 1930s America..."
Library Journal Review gave it a "Recommended" More
Book I of the Rose Series.
~ IPPY AWARD WINNER ~
Midwest Book Review referred to it as“...an excellent blend and deftly written look at 1930s America in between the Great Depression and the second Great War – highly recommended for fans of coming of age fiction...”

Library Journal review of the audio books give it a "Recommended" status:"Keleny details her [the main character's] journey and the myriad of characters she encounters in an enjoyable and entertaining way." They also

Rose is thrown into the lives of the varied people and towns of the Mississippi while working on river boats, going to a prep school in St. Louis where she lives with a black family in the Ville, and working in a bordello in New Orleans (not as a call girl, of course. She is a Catholic girl from the Midwest after all). What she doesn’t anticipate are the close relationships that develop with many of the women she encounters. She also discovers the harshness of the world far away from the security of home.
Ultimately, Rose realizes what is most important in her life: her family and her friends.

Rosebloom takes place at a time in history that buffets Rose between the great depression and the coming wave of World War II. She gets herself into situations through her naiveté and also just by chance that test her resolve and teach her not only about herself but about the world of others which she would have never know if she hadn’t left her small farm in Southwest Wisconsin.

Rosebloom is Christine’s debut novel and has won a 2008 Independent Publishers Book Award (IPPY) for historic fiction.
Some of the judges of this award called Rosebloom “A wonderful portrait of life on the river....” “Rose is a female Huckleberry Finn.” Of the author; “(Christine is) A soulful and lively writer.”

Christine is an award-winning author, reader, editor, book designer and publisher. She loves writing and helping others publish the book of their dreams through her publishing company: CKBooks Publishing. Christine also teaches workshops at local libraries for both youth and adults and at a youth writing and publishing summer school class. You can find all of her books at christinekelenybooks.com. That is also where you can sign up for her Readers’ Group.

About the Series: Rose Books

These 4 books follows the life of a young Wisconsin farm girl who run away from home, gets a job on a Mississippi river boat and eventually becomes a nurse in WWII. When she comes home from the war, she tries to deal with what she's seen in the service and how she's treated back home.

Rosebloom tells the story of Rose Krantz, a 16 yo girl growing up in southwest Wisconsin during the Depression. Knowing that her family is overburdened, she decides to run away from home to seek adventure. Upon signing up to work on a river boat, she begins to realize that the world she knows and the 'real' world are two different things.

The author skillfully weaves historical facts into her book, and it's easy to tell that a lot of research was done prior to writing this novel. I also found that Ms. Keleny took on some rather difficult subjects, such as racial tensions and prostitution, and handled them very realistically and very responsibly, yet managed to capture the voice of a young, naive girl whose optimism and genuine friendliness sets her apart from the people of her time.

Rose doesn't see color - she just separates people into nice and bad. This allows her to form a strong friendship with Lilli Mae, a colored girl whose room she shares on the river boat and who works with her. It allows her to view Grandma B. as family, and be invited into the matriarch's home. It could be argued that her lack of understanding in regards to segregation is a tad unbelievable, but I chose to overlook that aspect, and decided that her sheltered upbringing on her family's farm was the cause of that.

Upon her arrival in New Orleans, Rose is separated from Lilli Mae at the docks, and makes the acquaintance of a Madam running a brothel. Madam E. takes the young girl under her wings and offers her a job keeping the books as well as sending her to school, plus room and board, in exchange for those services.

It is there that Rose meets Malcolm, a young, Cajun man who is a jack of all trades. They fall in like and begin a courtship, one that I'm told is continued in the sequel.

Rose's voice was mostly believable. The story is told primarily from her POV though we also get glimpses at the other characters' inner thoughts. She's usually optimistic and cheerful, even in dire circumstances, choosing to see the glass as half full and exhibiting a canny ability to find good even in bad situations. The narration is almost always so cheerful that I found myself smiling along with the character.

The writing is rich and very detailed, and I found myself completely immersed in the vivid descriptions of the country side, the boat and the towns, so much so that it felt as if I was right there with the characters.

The primary focus of the story is not romance, but the adventures of a young girl in the mid-30s, coming into her own. Very nicely done.

I received a free copy of the book from the author in exchange for an honest review.

(reviewed 4 months after purchase)
Diane Castle reviewed on April 11, 2012
(no rating)
Christine Keleny has a delightful writing voice which transports you back in time with the main character Rose, a sort of female version of Huckleberry Finn. Rose is an optimistic young woman who altruistically leaves her overburdened family to find work for the summer in the kitchen of a riverboat. Despite her circumstances, Rose is almost always cheerful, and reading her narration is a mood-lift. We follow her through her adventures down the Mississippi, to St. Louis and even New Orleans and back as she receives one heck of a life education along the way.

The adventure is full of interesting juxtapositions and lovable characters. POSSIBLE SPOILER ALERT: For example,at one point in the story Rose attends a high falutin' private school while secretly living with a black family. At another point, she lives and works in a bordello (in an administrator's capacity, not as a call girl) while attending a private Catholic school. END SPOILER ALERT

The historical details in this book are rich, well-researched, and engaging. At the end of the book the reader discovers that many of the details were actually relayed to the author by a person who lived through the era and worked on a riverboat, which makes this book a wonderful historical recording of the details of an era.

You have subscribed to Smashwords Alerts new release notifications for Christine Keleny.

You have been added to Christine Keleny's favorite list.

You can also sign-up to receive email notifications whenever Christine Keleny releases a new book.