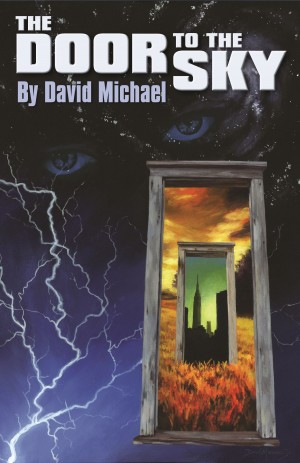 The Door to the Sky

By David R. Michael
Rated 5.00/5 based on 1 review
Gods are at war. Dragons attack TV stations and winged gargoyles do battle with steam-powered behemoths. Gaia the Earth Mother and the woman called Blue lead the Weirdlings in their struggle against the Tyrant and his Compatriots, while the man who calls himself the Traveler walks through the chaos looking for The Door to the Sky.
Available ebook formats: epub mobi pdf rtf lrf pdb txt html
First 30% Sample: epub mobi (Kindle) lrf more Online Reader
pdb
Price: $2.99 USD
Buy Add to Library Give as a Gift
How gifting works
Create Widget
Tags: gods war multiple universes parallel worlds worlds in flux
About David R. Michael

David is the designer and developer of The Journal, personal journaling software for Windows. He has also designed and developed video games, and has written two nonfiction books and numerous articles about video game development.

David lives with his wife and kids in Tulsa, Oklahoma.

Reviews of The Door to the Sky by David R. Michael

Despite my obvious enjoyment of this novel, I'm finding it not a simple book to review. David Michael presents the reader with a kaleidoscope of different scenes that are initially difficult to make sense of. I think after a couple of small chapters, I came to a crossroads: should I forge ahead not really understanding what's going on, or should I give up and go on to the next book.

Luckily for me, I had already read some of David Michael's work and had really enjoyed it so it was a 'no brainer'. I'm so glad I kept going. This author has an obvious skill at weaving a story together from seemingly disparate threads. He did so in "The Summoning Fire" and he does so even more deftly in this novel. As I progressed through the book the substance of the story became known to me as subtly as a new history during a Merger. I suddenly understood aspects as if I had always understood them.

My only real criticism would be that the last chapter was unnecessary. The abruptness of the ending the chapter before would have been a thing of beauty - a final brushstroke, so that I could then finally stand back and admire the full canvas.

For those who intend to read it, I strongly suggest not contemplating anything until the very end where one can stand on top of the mountain peak after a bracing climb and enjoy the view.

You have subscribed to alerts for David R. Michael.

You have been added to David R. Michael's favorite list.

You can also sign-up to receive email notifications whenever David R. Michael releases a new book.