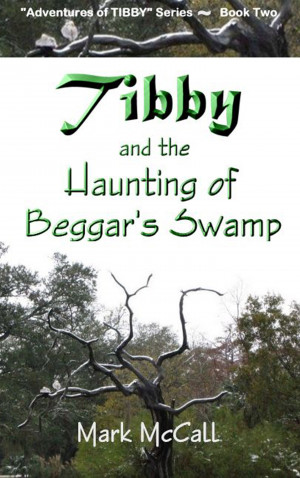 Tibby and the Haunting of Beggar’s Swamp

By Mark McCall
Tibby is back! The saga continues with book two, “The Haunting of Beggar’s Swamp.” You’ll find yourself down in the nearly inaccessible and dangerous mangroves of the Everglades amid poisonous gas, mud traps, and “swamp lickys” all woven into a new adventure filled with intrigue, mystery, and comedy. More
Tibby is back!

In and about the non-descript community of Whitewater and its residents in Southwest Florida, our protagonist and the supporting characters have now become familiar and somewhat endearing after their introduction in book one, “Adventures of Tibby--Nature’s Awesome Extraterrestrial Guardian.”

The saga continues with book two, “The Haunting of Beggar’s Swamp.” You’ll find yourself down in the nearly inaccessible and dangerous mangroves of the Everglades amid poisonous gas, mud traps, and “swamp lickys” all woven into a new adventure filled with intrigue, mystery, and comedy.

Not only will there be an immediate resolve to some unanswered questions concerning the outcome in the relationship between Toby and Sam, but some captivating new characters, too-- some you just won’t get enough of, and others you can’t wait to be met with justice. There’s also an unexpected, jaw-dropping twist or two to the nature of some of the existing characters that will heighten and renew reader appreciations.

And let us not forget about Tibby. Just when you thought it was safe to assume a standardized list and accounts concerning his lively and unpredictable character, a whole new repertoire of abilities not yet revealed become manifest, offering a rewarding and unexpected renewal of attachment to his lovable persona.

Price: $2.99
Free! USD
Buy with coupon Use the code FE55Y at checkout to get this book for free
(Offer good through Dec. 27, 2021 )
Have a better coupon?
Add to cart, then apply your coupon
Add to Library Give as a Gift
How gifting works
Create Widget
Tags: fiction humor science fiction extraterrestrials manatee florida everglades wildlife conservationist zoologist romance nostalgia
About Mark McCall

“THE ADVENTURES OF TIBBY” is Mark McCall’s debut as a fantasy-fiction author with cutting-edge potential as a storyteller. His vivid imagination and talent for expression launched a desire to satisfy a ten-year old dream of writing a series of novels about “Tibby,” a sweet-natured and awesomely talented alien character sent to Earth to be Nature’s Guardian.
His vocational background includes thirty years in retail management and ten years of intermittent work in construction, law enforcement, and insurance sales. The writing of many reports for the latter two jobs seemed to stimulate a latent desire for continued prose. His varied work background, plus his various personal escapades and unusual “wild happenings”—coupled with a dominate flare and liveliness for satire and sarcasm (one never trailing far behind the other)—has now provided him with a wealth of life experiences and research from which to draw for his writing.
Mark, a husband and father of three, was born and raised in San Diego, California. He moved to the South in 1986 and currently resides in Kentucky with his wife, Kimberly.

About the Series: The Adventures Of Tibby

Here you go world, ready or not! Tibby, a cat-like extraterrestrial from the Spirograph Nebula in the constellation Lepus, has arrived to protect and perfect the twenty-first century flaws of flora and fauna within Florida’s Everglades. Tibby is approximately five earth years old, but contrary to that, in certain respect, rates beyond being a super genius with untold and unparalleled powers.

Also in Series: The Adventures Of Tibby

You have subscribed to alerts for Mark McCall.

You have been added to Mark McCall's favorite list.

You can also sign-up to receive email notifications whenever Mark McCall releases a new book.