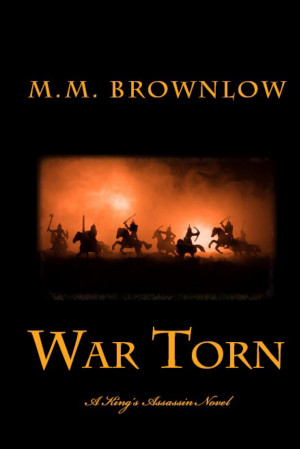 The council is pressing the young king to marry, but Aislynn, the woman he loves, continues to avoid his proposal. Aislynn, Eryk's bodyguard and chief adviser, cannot reconcile her role as the king's protector with the possibility of becoming the queen and a mother.

When the enemy proposes an alliance by marriage, Eryk reluctantly accepts. But Vivien, Queen of Madelia, has plans for both kingdoms. Can Eryk and Aislynn find happiness? Can a new future arise from the ashes of the war torn kingdom?

M.M. Brownlow works as an elementary teacher and lives with her husband and three sons in Ontario, Canada. She's also surrounded by a variety of "critters" - a dog, two cats, two guinea pigs, a hamster, a pair of frogs, and a leopard gecko. Life is never boring, and she finds herself often wishing for more hours in a day.

Also in Series: The King's Assassin

I love them! I have all of them :D So happy with them!

I love this series and can't wait for another! great reading from start to finish.

You have subscribed to alerts for M.M. Brownlow.

You have been added to M.M. Brownlow's favorite list.

You can also sign-up to receive email notifications whenever M.M. Brownlow releases a new book.