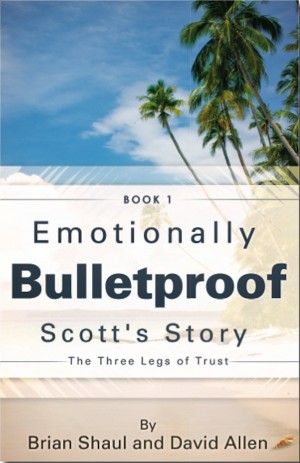 Surrounded by the paradise of the Marshall Islands, Scott Calloway experiences his own close encounter with death, and begins his journey towards learning what trust is all about. He soon finds himself back at home facing age-old problems with familiar faces.

By following Scott, you will finally answer the big question: Who Should YOU Trust? More
Learn The Secrets of Trust...

The death of the woman he loves leaves Scott Calloway in a dark storm of emotion. Surrounded by the paradise of the Marshall Islands, he experiences his own close encounter with death, and begins his journey towards learning what trust is all about. He soon finds himself back at home facing age-old problems with familiar faces. Along the way, he discovers:

* the legacy of a dead relative
* the three keys to trustworthiness that no one can be successful without
* a stronger belief that a higher power is watching over him, despite all his struggles

By following Scott, you will learn about the three keys to trust and see them in action throughout the story. At the story's end, worksheets are available to help you make decisions and tackle the big question: Who should YOU trust?
Download: epub mobi (Kindle) pdf more Online Reader
lrf pdb txt
Price: Free! USD
Add to Library
Create Widget
Tags: christian fiction integrity marshall islands trust issues alaskan character development relationships
About David G Allen

Leaving hometown and innocence behind, David traveled to distant lands by Ship, by Sky, and by Mind.

He returned with dangerous ideas, strange powder that explodes, and broken hearts (some parts of others' got mixed in with his own). He keeps most of it locked in a wooden chest preserved with tar and strengthened with iron bands and padlocks.

The people in his village give him strange looks - travel has been both kind and cruel to the social outsider.

When he returned to fight in the Great War, he found that up until then he was a puppet in a diabolical plan to defeat true justice.

Now a double agent - he travels to multiple dimensions, foreign lands, and other worlds using wits, fists, and technological gadgets to collapse the Overlord's organization from within. Oh, and lasers - don't forget about the lasers.

David is a believer in the Christian faith, which often acts as a guide in determining which tales are worth telling.

You have subscribed to alerts for David G Allen.

You have been added to David G Allen's favorite list.

You can also sign-up to receive email notifications whenever David G Allen releases a new book.