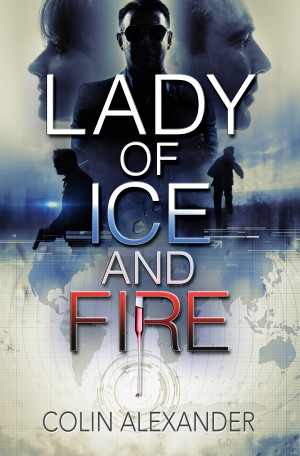 Lady of Ice and Fire

By Colin Alexander
Rated 4.00/5 based on 1 review
Lady of Ice and Fire is a tale of espionage in post-Cold War Europe. George Jeffers, a brilliant biochemist, is frantic to recover a stolen biotech breakthrough. Accident teams him with Taylor Redding, self-styled World’s Greatest Female Adventurer, whose youth and beauty hide dark secrets. Instead of chasing a thief, they land in a deadly political game that could change the destiny of Europe. More
The Soviet Union has fallen. The Cold War is over. Or, is it? Dr. George Jeffers’ biotech breakthrough has been stolen and his friend is missing in Amsterdam. Jeffers is a brilliant biochemist but a life spent in academic laboratories has left him ill-prepared for the rough and tumble real world. Despite his naiveté, Jeffers rushes off to find his invention and rescue his friend, only to be nearly killed right at the start. He falls in with his savior, Taylor Redding, self-styled World’s Greatest Female Adventurer, a woman whose youth and beauty hide many unpleasant secrets. The oddly matched pair crisscross Europe in their search, a Europe where the spies of the Cold War have new masters but the same deadly tricks. The body count rises as they go and their suspicions build that the invention is but a pawn in a deadly new political game, one having an eerie foretaste of the current world. They find enemies in abundance, but even their friends may not be friends. Betrayal is no further away than a change in self-interest. Jeffers must shed his naiveté and Taylor her secrets or neither they nor stability in Europe will survive.
Available ebook formats: epub
Price: $0.99 USD
Buy Add to Library Give as a Gift
How gifting works
Create Widget
Tags: fiction mystery fiction spy fiction espionage fiction set in a foreign country
About Colin Alexander

Colin Alexander is a writer of science fiction and fantasy. Actually, Colin Alexander is a pseudonym, maybe an alter ego, or who the author would have been if he hadn't had a career as a medical researcher. He’s been reading science fiction since he was ten and has published five books so far including Starman’s Saga and Accidental Warrior. He’s an active member of both the Science Fiction and Fantasy Writers of America and of Mystery Writers of America. Away from writing fiction, Colin is a doctor and a biochemist whose idea of relaxation is martial arts (taekwondo and minna jiu jitsu). He lives in Maine with his wife and a cat named Appa. Learn more about Colin at www.afictionado.com and on facebook at @ColinAlexanderAuthor

Reviews of Lady of Ice and Fire by Colin Alexander

This is a curious sort of thriller. By no means does it feature nonstop action, at least in the early going. Even at the three-quarters point, the plot bogs down in a new element that needs extensive setup. The real interest for me was Taylor Redding, the oddball adventurer, and the way she and lab geek George Jeffers develop from total strangers to partners in risky enterprises. Eventually, standard thriller elements show up, as the characters dash from one location to another in Europe. There's a box of cash, firearms, fast cars, and several dead bodies. The conclusion is sufficiently tense and conclusive, but with tantalizing possibilities.
The novel is set in the 1990s, shortly after the collapse of the Soviet Union and the reunification of Germany. The author explores possible developments from that situation, with a rather chillingly apt conclusion, given present-day events. Another aspect of that time period is there are no cell phones, no digital cameras, no internet. Their absence didn't bother this reader, but some may find that aspect quaint, or irritating.
It's a pretty good read, despite occasional episodes of over-explaining and a few spots where Taylor's talents seem a bit too good to be true. But then, I've never stolen a plane and then jumped out of it, or jimmied locks, or roamed the world as a thrill-seeking adventurer.

You have subscribed to alerts for Colin Alexander.

You have been added to Colin Alexander's favorite list.

You can also sign-up to receive email notifications whenever Colin Alexander releases a new book.