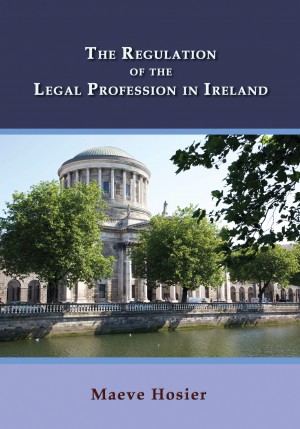 The Regulation of the Legal Profession in Ireland

Professor Laurent Pech, formerly of the School of Law at NUI Galway and now Head of the Law Department at Middlesex University London, has stated that this study "makes a decisive contribution to the on-going scholarly and policy debates on this issue, by evaluating the present regulatory framework and offering a number of suggestions to improve it in a context of increasing transnationalisation of the market for legal services." He added that Hosier's "innovative approach to the problem of lawyers' misconduct is, in particular, worth noting. This aspect of her work has the potential to help alleviate a problem which has been extremely costly for both the legal profession and wider society alike. Her doctoral research also provides a valuable insight into the impact of the Troika upon the regulation of the legal profession in so-called 'bailed-out countries.'" Professor Pech concluded that the author "should be congratulated for having made an exceptional contribution to the current debate on the regulation of the legal profession both nationally and internationally. I have no doubt that her original and thought-provoking work will be useful to policy-makers and scholars alike."

This book features Professor John Flood's new, substantive introduction, explaining the worldwide implications of professional reform efforts, the financial crisis that precipitated them, and the relation to regulation of the legal profession in other countries. It also includes the author's notable examination of the effect of the Troika's bailout conditions on law reform possibilities in Ireland. This part of the book was presented in the US at the 2013 annual conference of the Law and Society Association. Finally, the book adds a section on 2014 developments in reform efforts in Ireland.

Maeve Hosier completed her doctoral degree in 2014 at The National University of Ireland Galway, studying the regulation of the Irish legal profession and comparing it to other systems and disciplinary processes. Having served as a tutor in Law for several years at the School of Law at The National University of Ireland Galway, she was recently appointed as a Lecturer in Law at Middlesex University, Mauritius Branch Campus.

You have subscribed to alerts for Maeve Hosier.

You have been added to Maeve Hosier's favorite list.

You can also sign-up to receive email notifications whenever Maeve Hosier releases a new book.