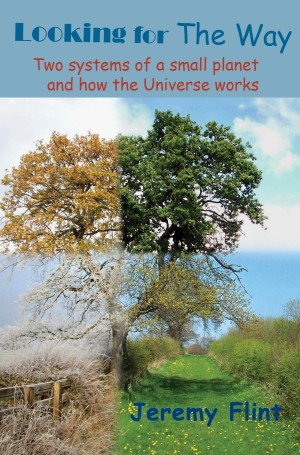 Looking For the Way: Two systems of a small planet and how the Universe works

Jeremy Flint worked his way up the career ladder, though at meetings he introduced himself as a “time-served electrician working my way down” as he often felt his career progress always took him further away from the truth he was seeking.
On his lapel badge was “Experimental Specialist”, about as high as a technician could get without turning to the dark side of administration or management. He always preferred science and the laws of physics; projects and people came and went but the laws of physics remained intact, off-limits to change by administration and management, who would have happily changed them if they could! But they seemed content to rearrange chains of command and working structures ad infinitum. Meanwhile, he evolved from one project to the next, making things work in accordance with the established laws of physics and engineering. So most of his story is set in an apparently bygone time, though there are remarkable similarities with today, even though three decades have elapsed.

Reviews of Looking For the Way: Two systems of a small planet and how the Universe works by Jeremy Flint

You have subscribed to alerts for Jeremy Flint.

You have been added to Jeremy Flint's favorite list.

You can also sign-up to receive email notifications whenever Jeremy Flint releases a new book.