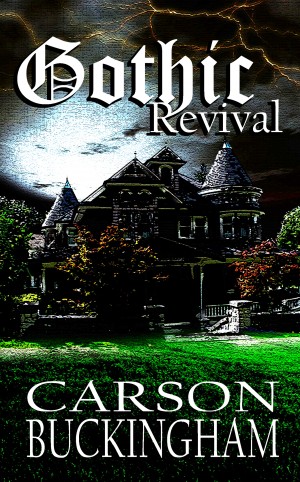 But along with the huge paycheck comes a set of unsettling rules that must be followed explicitly if they are to accept the offer; one of which is they must reside on the property having no direct contact with the outside world until the job is complete.

Is Theodora Hamilton just an eccentric woman with a peculiar way of doing things, or is there a more sinister agenda that Alex and Leo are unaware of? What exactly does she have in store for this down-on-their-luck couple who have no choice but to accept the offer and the strange requirements that come along with it?

Carson Buckingham knew from childhood that she wanted to be a writer, and began, at age six, by writing books of her own, hand-drawing covers, and selling them to any family member who would pay (usually a gum ball) for what she referred to as “classic literature.” When she ran out of relatives, she came to the conclusion that there was no real money to be made in self-publishing, so she studied writing and read voraciously for the next eighteen years, while simultaneously collecting enough rejection slips to re-paper her living room… twice.

When her landlord chucked her out for, in his words, “making the apartment into one hell of a downer,” she redoubled her efforts and collected four times the rejection slips in half the time, single-handedly causing the first paper shortage in U.S. history.

But she persevered, improved greatly over the years, and here we are.

Carson Buckingham has been a professional proofreader, editor, newspaper reporter, copywriter, technical writer, comedy writer, humorist, and fiction author. Besides writing, she loves to read and work in her vegetable garden. She lives in the United States in the state of Arizona.

Appropriately creepy set-up, characters you'll like, and generally solid plotting. Overall: a good book, and worth a read!

You have subscribed to alerts for Carson Buckingham.

You have been added to Carson Buckingham's favorite list.

You can also sign-up to receive email notifications whenever Carson Buckingham releases a new book.