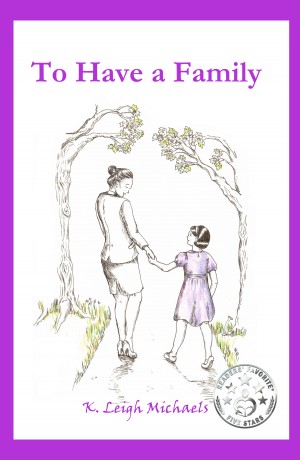 To Have a Family

By K. Leigh Michaels
Ever since she was abandoned at the age of six, all Samantha Jenkins has wanted is to be adopted. But she doesn’t want just any family; she has a specific one in mind, one that isn’t possible for her.
Join Samantha on her journey through friendship, loss, and the unexpected, as she learns what it means... to have a family.

K. Leigh Michaels has had a passion for children and teens since she was a young girl, and has been writing stories since she was six years old. Combining these two loves came naturally as a teen when she began writing short stories and poetry for teens. Leigh has a Bachelor of Arts in English from the University of Wisconsin, and has had several poems published in anthologies.

Leigh lives in Wisconsin with her husband and five adopted children, whom she loves spending time with and learning from on a daily basis. When she isn’t writing, she enjoys playing the piano and occasionally composes simple arrangements and accompaniments. She loves to read, almost as much as she loves to write. She enjoys cooking and baking and is also an amateur runner.

You have subscribed to alerts for K. Leigh Michaels.

You have been added to K. Leigh Michaels's favorite list.

You can also sign-up to receive email notifications whenever K. Leigh Michaels releases a new book.