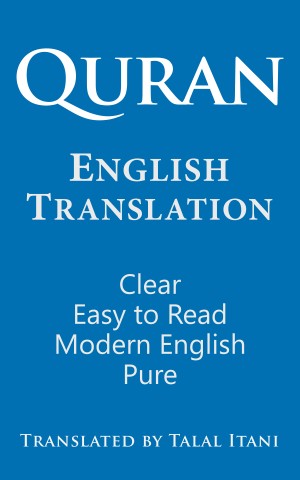 By Talal Itani
Rated 3.00/5 based on 3 reviews
The last book from God. It contains Guidance, Mercy, and Healing. This Quran Translation is clear, pure, easy to read. It is written in contemporary English. The sentence structure is simple, the vocabulary is common, the flow is smooth. The meaning is surprisingly close to the Arabic original. This edition uses the word Allah to refer to the Creator. More
Perhaps the best Quran English translation. It is clear, easy to read, and very faithful to the Arabic original. It closely follows the Arabic text, and often reminds the reader of the Arabic original. It uses today's English language, and today's English vocabulary, thus it is easy to read and understand. The flow is smooth, the sentence structure is simple, the meaning is clear.

This Quran translation has no interpretations, no footnotes, and no explanations. It is a pure translation of the Quran, from Arabic to English, and it does not try to emphasize any school of thought. The text purely and accurately translates the Holy Quran, from Arabic, into contemporary English.

It was translated by a Muslim, who saw firsthand the miracles inside the Quran. His native language is Arabic; his everyday language is American English. For 15 years, he studied the Quran. For many years, he translated speech between his mother and his wife. For a living, he develops quality software.

Talal Itani is an electronics engineer, software developer, and writer. He was born in 1961, in Beirut Lebanon. He immigrated to the United States when he was 18, seeking education and peace. In 1983, he graduated with a Master’s degree in Electrical Engineering. After a few years of employment, he founded a research and development company, which quickly became successful and renowned in the field of telecommunications.

Talal first encountered the Holy Quran in 1992. He studied and researched the Quran for 15 years, then decided to translate it himself, into clear and easy-to-read modern English. The translation, which he published in 2012, is praised as pure, clear, and very faithful to the Arabic Original. Talal currently develops software and maintains the Quran translation. He lives in the United States, is married, and has two adult daughters.

Easy to read and understand. Enlightening.

Muslims stand out as the most dreaded terrorists...worldwide.

You have subscribed to alerts for Talal Itani.

You have been added to Talal Itani's favorite list.

You can also sign-up to receive email notifications whenever Talal Itani releases a new book.