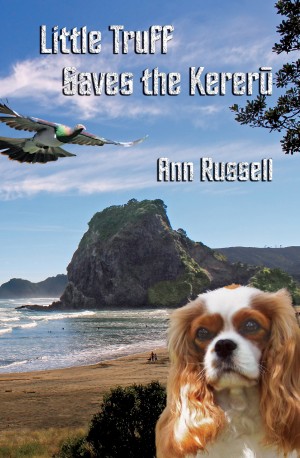 Little Truff saves the kererū is about the importance of conservation to retain and sustain fragile ecosystems and the worldwide repercussions when they are lost. It is the third in a series of four about animal issues.

“It certainly is a story with important ecological messages, that grips the reader as it unfolds.”
Sandra Coney QSO, Chair Waitākere Ranges Local Board,
Auckland Council

Ann Russell wanted to be a writer when she was twelve. Her first article was published ten years later, and she has since written non-fiction for major New Zealand newspapers and magazines. Food, fashion, subtropical plants, aromatherapy, cats, dogs and embroidery have been her main subjects. She has authored the book New Zealand Heritage Cross-Stitch, published by HarperCollins in 1997, and she has also written poetry.
Ann was editor to the Auckland branch of the Newfoundland Club. The idea of a fictional story presented itself when she brought home a Humane Society rescue dog, a tricolour Cavalier King Charles Spaniel called Truffles or “Little Truff”. A series of events also led her to romance writing, and she has been a finalist in two competitions held by the Romance Writers of New Zealand.
Ann is proud to be a New Zealander, owned by two cats, and she loves living in West Auckland.

You have subscribed to alerts for Ann Russell.

You have been added to Ann Russell's favorite list.

You can also sign-up to receive email notifications whenever Ann Russell releases a new book.