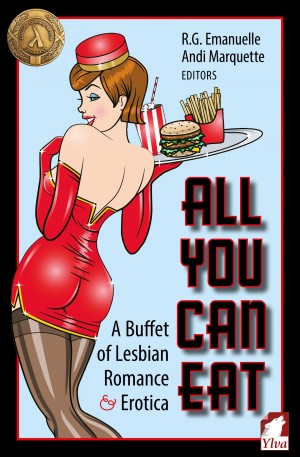 All You Can Eat. A Buffet of Lesbian Erotica and Romance

Each story also ends with a recipe. Some of these require cooking implements while others are whimsical accompaniments that don’t require cooking at all—at least not in the traditional sense. After all, food serves as more than sustenance—it’s a trigger for love, laughter, sex, pleasure, and carnal and sensory satisfaction. Whatever your palate prefers, you’re sure to find something tasty here.

R.G. Emanuelle is a writer and editor living in New York City.

Her university degree in English and literature propelled her into publishing, where she spent 20 years as an editor, typesetter, and graphic designer. She is co-editor of Skulls and Crossbones: Tales of Women Pirates, and her short stories can be found in Best Lesbian Erotica 2010; Lesbian Lust: Red Hot Erotica; Women in Uniform: Medics and Soldiers and Cops, Oh My!; Lesbian Cops: Erotic Investigations; Khimairal Ink; Read These Lips, Volumes 4 and 5; and the online collection Oysters & Chocolate. When she was child, a neighbor called her a vampire because she only came out after dark, so it’s fitting that her first novel, Twice Bitten, is about creatures of the night.

When she’s not writing or editing, she can usually be found cooking or developing recipes, as she is also a culinary school graduate.

Reviews of All You Can Eat. A Buffet of Lesbian Erotica and Romance by R.G. Emanuelle & Andi Marquette

You have subscribed to alerts for R.G. Emanuelle.

You have been added to R.G. Emanuelle's favorite list.

You can also sign-up to receive email notifications whenever R.G. Emanuelle releases a new book.