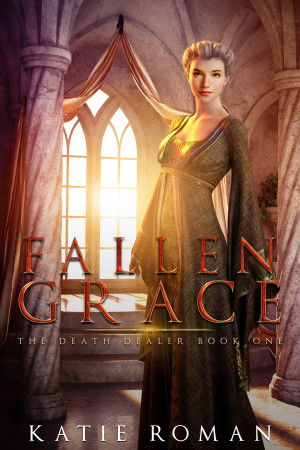 By Katie Roman
Rated 5.00/5 based on 2 reviews
Exiled and shamed Grace rises above her new station in life to become a hero. More
Branded a witch and exiled after a dishonorable display at the king’s annual tournament, quiet Grace Hilren is forced to uproot her life of luxury as a lord’s daughter and move to the slums of the port city, Glenbard. But Grace carries a secret. Though trained to be a fine lady, she also learned to handle a sword and has made it her mission to eradicate evil and injustice where she finds it. Even in exile, Grace continues her work under the given name of Death Dealer. Her nightly deeds bring her to the notice of the self-proclaimed King of Thieves, Marcus. When the king’s power is threatened by a rival named Mac, the Death Dealer unwittingly becomes a pawn in the struggle between thieves for control of the lower city. The game becomes dangerous as Grace realizes she may not be able to best this usurper.
Download: epub mobi (Kindle) pdf more Online Reader
rtf lrf pdb txt
Price: Free! USD
Add to Library
Create Widget
Tags: coming of age vigilante pirates knights gods and goddesses swordswomen
About Katie Roman

Raised in the suburbs of Chicago, Katie Roman has been many things. Student, band geek, dog sitter, history major , and consummate tea drinker, but above all things she's been a writer.

About the Series: The Death Dealer

One young woman finds her place in the world as both vigilante and hero.

Also in Series: The Death Dealer

I picked this up on a whim and it fooled me into thinking it was boilerplate Action Hero Princess with Complex Love Triangle. Then the first twist hit and it veered off in a very different direction.
The characters are fleshed out and the plot moves swiftly with a number of surprises. The narrative gets a little repetitive from time to time, but it never bogs down. I suspect I'll be investing in more of the series.

It’s only a month or so off of the release of the next Winner’s Curse book and I’ve been really needing something to fill the void that The Winner’s Crime left - enter Fallen Grace, an amazing fantasy story of a young noble girl who’s banished from court alongside a servant after her attempt to pose as a knight was discovered. Lukily for her, no-one discovers that she’s also been posing as a local (male) hero, The Death Dealer who’s notorious across the land.

I’m a sucker for a good strong female lead and I really got that with Grace. Fiercely loyal to her friends and family often gets in her into trouble as she’s not supposed to have more than a single brain cell. It was nice to see that while she still acted like a noblewoman, she had none of the airs and graces and quickly took up the job of a stablehand at the town she settled in, a job no-one in town wanted.

I loved the romance. I’m saying nothing about who because there was certainly a lot of potential for more than one guy in the book but he was certainly my favourite. He definitely had faults which I’m hoping are worked on later in the series but he and Grace just worked so well together (just like Kestrel and Arin). I’ll be happy to see this series sitting on my shelves with The Winner’s Crime and Poison Study series.

You have subscribed to alerts for Katie Roman.

You have been added to Katie Roman's favorite list.

You can also sign-up to receive email notifications whenever Katie Roman releases a new book.