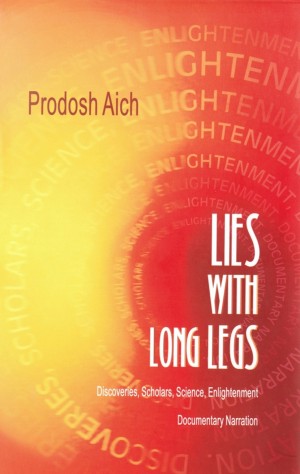 Colonialist Imperial England had prepared a concerted design to establish the superiority of blond-blue eyed-white-Christian culture over other cultures that they opted to define as "primitive", particularly in case of India.

Prof Aich uses juxtaposition to drive home a point and leaves judgement to readers. He frames a question and then answers it by using the primary source material. The book is bound to trigger an academic debate in the West also and would go a long way to establish once for all that the much-trumpeted and self-championed discipline of Indology in the West has in fact been based on falsehood.

It must have been a design that none of the scholars so far bothered to use the existing material, so abundantly available, which could have helped to unravel the truth about the colonial powers and imperial administration and bureaucracy. Scholars after scholars, even after the end of colonial empire, have continued to overlook the material that would have removed the well-laid myths about Indian society, polity and culture.

It would raise questions on popularly accepted theories on India, such as did the Aryans come to this part of the world from the north or they emigrated and then pushed back the original inhabitants to south. The book also puts a serious question mark on the anthropological understanding of the ancient Indian society as sought to be explained on the basis of the colour of the skin.
Available ebook formats: epub
Price: $5.99 USD
Buy Add to Library Give as a Gift
How gifting works
Create Widget
Tags: science narration discoveries enlightment documentary scholars
About Prodosh Aich

PRODOSH AICH (1933), born in Kolkata, studied PHILOSOPHY in India, ETHNOLOGY, PHILOSOPHY and SOCIOLOGY in Germany, taught social sciences at the universities at Cologne, (Germany), Rajasthan (Jaipur, India) and Oldenburg (Germany).
He wrote Farbige unter Weißen (Coloured amongst Whites) in 1962. Two of his books: Die Indische Universität (The Indian University) 1971 and Rathaus-Plünderer (City-hall Plunderers) 1986 were sabotaged.
Preis des aufrechten Gangs (Thorns on a Righteous Path) in 2001 includes Die indische Universität and tales all about the struggle that went on for thirty-five years. Lügen mit langen Beinen (January 2003; LIES WITH LONG LEGS (August 2004)
Besides books he has made radio features and documentary films for Television. He is an Indian though living in Germany for a longer period than most Germans.

Reviews of Lies with Long Legs by Prodosh Aich

You have subscribed to alerts for Prodosh Aich.

You can also sign-up to receive email notifications whenever Prodosh Aich releases a new book.