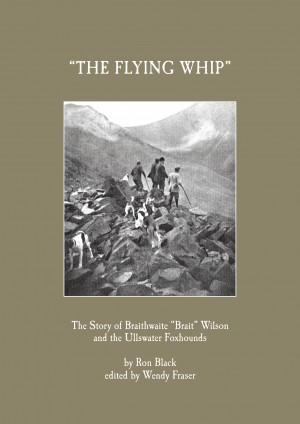 By Ron Black
Braithwaite "Brait" Wilson was appointed whipper-in to the Ullswater Foxhounds in 1911, aged 26, having followed hounds most of his life. His agility and swift-footedness soon earned him the nickname of 'The Flying Whip'. However, his military service during WWI and later life have always been an enigma, but Ron's account using contemporary reports, begins to throw some light on this. More
The story of Braithwaite “Brait” Wilson is incomplete despite considerable research and many emails and phone calls. His war records were bombed by the Luftwaffe in the Second World War and it is impossible to even find out in which of the Liverpool Battalions he served, let alone where he served and what might have happened to him, which may give a clue as to the reason for some of his subsequent behaviour in later years.

This book is the product of much research in libraries, family history sites and hunting reports. Parts of his story are a blank for the simple reason that although most of his hunting activities were recorded, most of the rest of his life was not; but I hope this book will help fill in a few gaps about Brait and the times in which he lived.

You have subscribed to alerts for Ron Black.

You have been added to Ron Black's favorite list.

You can also sign-up to receive email notifications whenever Ron Black releases a new book.