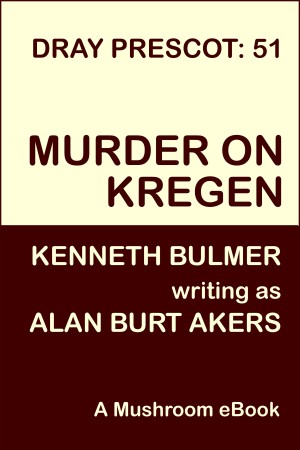 A new page turns in the unruly life of Dray Prescot, and all his strengths and inner resources will be required to confront fresh problems and perils. The Star Lords, furthering their mysterious ends, demand that he unite all the continents and islands of Paz as an emperor. This task is beset with innumerable difficulties.

So join Dray Prescot as he rides south from the port city of Zandikar on the inner sea of the continent of Turismond, the Eye of the World, with his blade comrade Seg Segutorio and the Princesses Velia and Didi of Vallia. Of course, as is the nature of Kregen, they face unexpected peril.
Available ebook formats: epub mobi pdf lrf html
First 20% Sample: mobi (Kindle) lrf Online Reader
Price: $4.99 USD
Buy Add to Library Give as a Gift
How gifting works
Create Widget
Tags: dray prescot kregen sword phantom spectre sword and planet antares planetary adventure kenneth bulmer
About Alan Burt Akers

Alan Burt Akers is a pen name of the prolific British author Kenneth Bulmer, who died in December 2005 aged eighty-four.

Bulmer was also active in science fiction fandom, and in the 1970s he edited nine issues of the New Writings in Science Fiction anthology series in succession to John Carnell, who originated the series.

You have subscribed to Smashwords Alerts new release notifications for Alan Burt Akers.

You have been added to Alan Burt Akers's favorite list.

You can also sign-up to receive email notifications whenever Alan Burt Akers releases a new book.