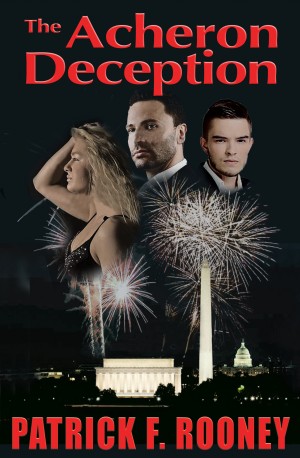 It begins in 1987, when the prevailing winds of Glasnost have caught the Russian leadership by surprise... catapulting the confusion caused by the impending breakup of the Soviet Union to new levels. For KGB agent Mikhail Volkov, the chaos provides something else altogether-An opportunity to steal four nuclear weapons from a Russian test facility.

Sean McGowan, a software engineer in the securities industry, has come a long way from the trailer park where he grew up in New Mexico. He leads an exciting life now, with wealth, influence, and the company of beautiful women, until Volkov comes after him to expropriate his ultra-fast derivatives trading program.

CIA Agent Beate Nicholson recruits Sean to help her track down financiers manipulating the stock markets. But first they must use their computer skills to thwart a massive cyber-attack against the world's banking system perpetrated using a multi-player gaming platform.

Sean and Beate's collaboration leads them to the doorstep of a rogue's gallery of sinister figures, including white-collar jihadist Rahim Delacroix—who wreaks revenge against the infidels that killed his family; and the mysterious John Napoleon, leader of the Protectorate—an environmental syndicate committed to saving the planet by seizing control of the world's resources.

Patrick Rooney is an author of techno-thrillers and historical fiction. A native of New Mexico, he attended the University of New Mexico, where he earned a Bachelor’s degree in Music Theory and Composition, and New Mexico State University, where he earned a Master's degree in Electrical and Computer Engineering. He subsequently earned a Master's Degree in Business Administration from The University of Denver. He honed his writing craft while working as a software designer in the computer industry. He has written two novels. Patrick lives in Broomfield, Colorado, where his interests include playing and composing music, travel, yoga, and investment management.

Reviews of The Acheron Deception by Patrick F Rooney

You have subscribed to Smashwords Alerts new release notifications for Patrick F Rooney.

You have been added to Patrick F Rooney's favorite list.

You can also sign-up to receive email notifications whenever Patrick F Rooney releases a new book.