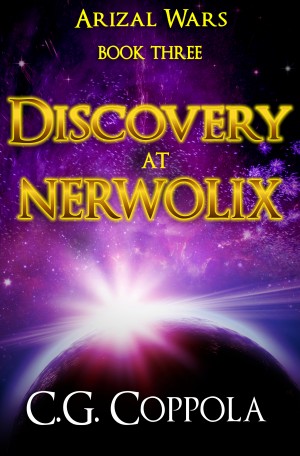 Rated 5.00/5 based on 1 reviews
After a visit to find Blovid, the last Arizal Leader, Fallon and the others reside on Nerwolix, preparing for and anticipating the Vermix invasion. With startling revelations about herself and her future with Reid, Fallon must use all her new strength and knowledge to help ensure the survival of her friends while protecting a sacred artifact that could disrupt the balance of the World.

C.G.Coppola is the author of the Fantasy Adventure series, Arizal Wars. In addition to short stories that explore magic and the paranormal, she writes books that involve a lot of kissing, kickass heroines, and fighting alongside best friends. When not writing, C.G.Coppola can be found watching Netflix, playing with her dog, Appa, or trying not to mess up a recipe she found on Pintrest.

Fallon lived a normal life on Earth until Clarence took her to Harrizel. There she met the troubled but smexy Reid and his band of Rogues and ended up part of an interplanetary war. Her life will never be the same again.
Discovery at Nerwolix is the third in the Arizel War series. It begins where the last ended. Fallon, Reid, and their allies transport to an ice planet to meet with the leaders of the Arizels, the "good" side in the interplanetary civil war. They need time to organize, but it's something they don't get. attacked, they escape to the jungle world of Nerwolix. Can they convince the inhabitants that war is coming before it's too late?
This is another great entry in a great series. Coppola had an amazing knack for pacing and ends every chapter leaving the reader wanting "just one more". The mythology is interesting, the world building is well done, the alien races varied and the characters fleshed out. I have to admit to a book crush on Reid!
The title for this one is perfect. Secrets are revealed and mysteries solved, some of which have their roots in book one.
If you like soft sci-fi or even fantasy (with the lack of hyper drives and abundance of mystical being this could easily appeal to fantasy lovers), lots of action, and twists and turns, then give this series a try, though I recommend starting at book one.

You have subscribed to alerts for C.G. Coppola.

You have been added to C.G. Coppola's favorite list.

You can also sign-up to receive email notifications whenever C.G. Coppola releases a new book.