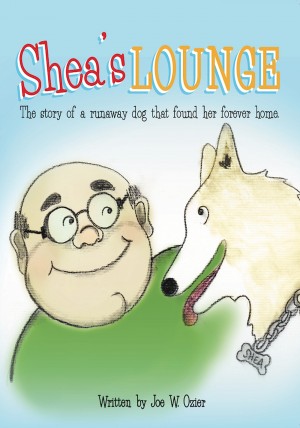 By Joe Ozier
This new book is based on actual events surrounding the discovery and adoption of a stray dog that had been living on Central Florida streets for at least two years. Shea, the runaway, was an escape artist who repeatedly escaped from Joe’s backyard until one day, after another escape, Shea returned to Joe’s home on her own, and never left again. It is heartwarming and based on a true story. More
Shea’s Lounge is the story of Shea, the Runaway. A female Border Collie who spent two years living alone on the streets of Florida. One day, while she was begging for food from the local fire station, Shea was captured and taken to the closest animal shelter by a fireman who felt sorry for her, and wanted her to find a real home. On the very first day she was available for adoption, Joe entered the shelter “just to look around”. When he heard Shea woof at him, it was love at first sight. Joe was clearly informed by the shelter’s staff that Shea was a runaway. That idea didn’t hit Joe until he brought her home. Shea quickly found a way out of Joe’s fenced yard and ran as fast as she could go. After several escapes and re-captures by Joe, the local shelter, and by nearby neighbors, Shea once again found herself back in another filthy alley, staring at the garbage and the loneliness she had always known. Suddenly, Shea had a vision of the man who gave her his food, his home and his love. She remembered how his gentle touch made her feel, how his soft voice sounded to her, and mostly, how he always had a full bowl of food for her to eat at anytime. Shea suddenly realized what her instincts were now telling her to do, and she ran as fast as she could go, straight back to Joe’s house. She anxiously waited for him to return home, while sitting on her new favorite lounge chair.
Available ebook formats: epub mobi pdf rtf lrf pdb txt html
First 20% Sample: epub mobi (Kindle) lrf more Online Reader
pdb
Price: $4.95 USD
Buy Add to Library Give as a Gift
How gifting works
Create Widget
Tags: dogs dogs pets dogs pets love dogs and inspiration dogs and adventure dogs point of view dogs and their people
About Joe Ozier

Joe Ozier has been a writer since his early teens, having dabbled in Science Fiction, Poetry, Lyrics and Haiku’s. He graduated with a degree in Geology in 1981, then turned his focus to Video production for the next two decades. He began writing Stage Plays and Musicals after moving to Florida in the late 1990’s, to pursue acting. Joe’s career as a Stage, Film and Television Actor, as well as Print Model, gave him an invaluable education in the importance of presentation to one’s audience. Joe has produced nine original stage plays and musicals to date.

Joe’s love for dogs and his developing knowledge of their behavior began with his family dogs. From his childhood experiences, this led into his first show and a ten year endeavor entitled, “ Shep The Musical”. Joe spotted Shea at the local Humane Society and realized that Shea had “that something special”. Shea was a runaway that was caught just a week earlier. As he quickly discovered, Shea was also an escape artist. Shea’s savvy street smart spirit became the true story of Shea’s Lounge. In 2011, Joe began professionally connecting dogs to their people under the name…Way of a Dog. Joe loves going to work and teaching dog owners how to get into their dog’s heads. Shea’s Lounge, a Family and Children’s book, is Joe’s first professional publication.

You have subscribed to Smashwords Alerts new release notifications for Joe Ozier.

You have been added to Joe Ozier's favorite list.

You can also sign-up to receive email notifications whenever Joe Ozier releases a new book.