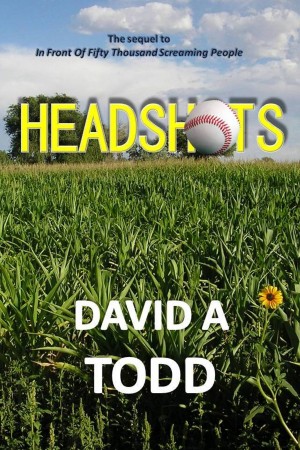 By David Todd
Rated 5.00/5 based on 1 reviews
A young pitcher must make a comeback while protecting his family from Mafia hit men. More
Ronny Thompson was injured in the 7th game of the World Series. Having just concluded a spectacular season that earned him such nicknames as “Robo Ron” and the “Pitcher of a Century,” he faced an off-season of rehabilitation and hoping to be able to make a comeback the following season.

At the same time he faces the challenge of reconciling with his girlfriend, Sarah, who had been disingenuous with him for months. He had to consider his feelings for her and sort out what love and forgiveness were all about.

He learns that the Mafia, which had been manipulating his life during the season, was also out to get his girlfriend. Three different contracts had been issued, and she needed protection. Working with the FBI, he comes up with the plans for that protection, plans that work, at first.

Headshots is the story of Ronny and Sarah’s journey though the minefields of major league baseball, Mafia bosses and their hit men, and reporters who want to sniff it all out. An undercurrent of three Chicago Cubs who were bribed to throw the playoffs runs throughout the book. Headshots picks up the story in the seventh game of the World Series, at the point described in In Front of Fifty Thousands Screaming People where Ronny’s life changes.

David Todd is a civil engineer by profession (37 years), a genealogist by avocation, an environmentalist by choice, and a writer by passion. He grew up in Rhode Island, where he attended public schools in Cranston and then the University of Rhode Island. In his adult life he has lived in Kansas City, Saudi Arabia, Asheboro North Carolina, Kuwait, and now northwest Arkansas since 1991. Along the way he acquired a love for history and poetry.

He currently works at CEI Engineering Associates, Inc. in Bentonville, Arkansas. He is Corporate Trainer for Engineering, which includes planning and conducting training classes and mentoring younger staff. He is the senior engineer at the company, and hence gets called on to do the more difficult projects that most of the younger engineers don't feel confident to tackle. He has recently worked on a number of floodplain studies and mapping projects. He is a registered engineer in three states, a Certified Professional in Erosion and Sediment Control, and a Certified Construction Specifier (certification lapsed).

He has been actively pursuing genealogy for fifteen years, having done much to document his and his wife's ancestry and family history. He has been writing creatively for eleven years. 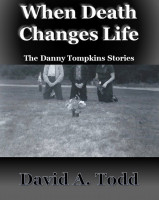 After getting injured by a gunshot in the seventh game of the World Series, Ronny now must reconcile three issues: repair and rehabilitation of his injuries so that he can come back for the next baseball season, reconciling with his girlfriend Sarah and figure out his love and feelings for her and how to deal with the Mafia who arranged the hit on him and now who have three contracts out for her death. This will require protection for her from the FBI so he must address that issue as well, especially since he is now a celebrity athlete, not a country boy on the farm.

Like the first book, this story has some baseball passages, a lot of mystery and Mafia crime issues and a bit of romance as well. Ronny and Sarah continue their relationship by becoming engaged and expecting their first child. In order to protect them, it is decided that Sarah will stay at the farm of Ronny’s parents with protection. I thought this part of the story was well-developed and all of the characters show a good deal of intelligence without typical stereotypes. That helped me believe this part of the story as I was reading.

In the meantime, Ronny has two surgeries to treat the injuries, but they leave him unable to pitch right away and he starts the next season on the disabled list. He does come back, but still has something nagging in his shoulder, so he eventually pitched out of the bullpen. The Cubs, while not a bad team, cannot repeat their success and miss the playoffs. This time, the baseball passages, such as a skirmish between the Giants and Cubs over brush back pitches and hit batsmen, were more realistic as well.

Like the first story, these passages were short and were not a big portion of the book, but important enough that the baseball was a key to understanding Ronny and his issues. This time, his major concern was the safety and welfare of Sarah and their unborn child.

This is important, because the bulk of the book concentrates on the Cerelli and Washburn crime families who engaged in the high stakes bet. As it becomes clear that the authorities are on to the shooting of Ronny, the extortion of three Cubs players to throw games and the contracts out on Sarah, these crime family members are leaving nothing to chance and try to make sure that Sarah is eliminated, as well as any nosy reporters who seem to be finding out more information as well as the authorities.
The adventure and pursuit that lead to the final conflict between Ronny, Sarah and these hit men is a very compelling story and the ending was one that even though it is somewhat predictable, was very entertaining and one that let me exhale when complete.

There are times the sequel is better than the original, more often in books than in movies. This book was a good example of this, as I enjoyed reading this one more than the original. It did help to have the background information gained in the first book, but this one felt a little more realistic and as a result, I was engrossed into the story. The reader does need to read Fifty Thousand Fans first or he or she will not be able to understand this book. But after doing that, make sure to follow up with this one as it is an even more gripping story of the Mafia, a little romance – and yes, some baseball as well.

Did I skim?
No

Pace of the story:
Excellent – the baseball portions, the family issues, the crime scenes and the final conflict all move along without slowing down, but at the correct pace so that it doesn’t seem rushed.

Do I recommend?
Yes – for any baseball fan or crime fiction reader. This book has excellent prose on both of those topics.

You have subscribed to alerts for David Todd.

You have been added to David Todd's favorite list.

You can also sign-up to receive email notifications whenever David Todd releases a new book.